Also run well in Nike Hole in the Wall Invitational 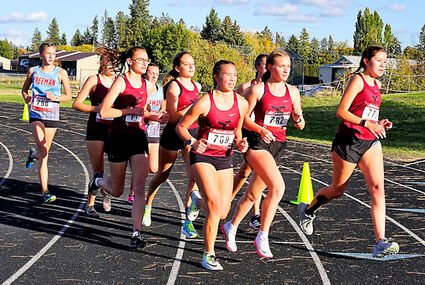 The Lady Cardinals ran as a pack in order to score well and win the race against Freeman.

MEDICAL LAKE – The Cardinal Varsity cross country team are both undefeated in league events after the girls and boys teams both beat Freeman in Medical Lake on October 6 said coach Gene Blankenship.

Junior varsity girls also prevailed against the Freeman team, and the boys team finished well but didn't have enough runners to officially score in this race.

Grouping together and running as a pack, the varsity girls defeated Freeman 15-50 said coach Blankenship. Grace Grubaugh finished first with a time of 22:28 followed very closely by Kayla Ramsey finishing at 22:30. Jenna Castro came in third for the Cardinals at 22:41the coach said, with Kylie Roberts right behind her at 22:44. Allison Payne and Katie Hiatt both crossed the finish line at 22:52 and Jasmine Cruz finished with a time of 23:59.

Medical Lake also outran Freeman in the boys' varsity race and scored 22-35 with Connor Palmen finishing first at 17:33 with Reid Headrick trailing closely at 17:37 said the coach. Sam Ornelas was the third Cardinal to cross the finish line, followed by Nakai Ornelas. Hector Gomez and Dominick Gifford closed out the field of varsity Cardinal runners.

Paden Buenzli crossed the line first for the junior varsity team, and he was followed by Nathaniel Diaz and Laban Kumenda the coach said.

The Cardinal runners also traveled to Lakewood, Washington on October 9 to compete in the Nike sponsored Hole in the Wall Invitational.

Coach Blankenship said, "The Hole in the Wall is considered one of the premier invitationals in the Pacific Northwest. There were 52 state ranked teams that participated and 5 Nationally ranked teams. So the competition was tough. I felt our teams were exceptionally well behaved and competed to the best of their abilities, as the large number of personal records show. Looking forward to even better performances in the near future!"

Kayla Ramsey led the lady Cardinals finishing with a time of 19:57, and Grace Grubaugh finished right after at 19:59. The "Gold Division" had a total of 227 runners and the Varsity girls finished 9th out of 31 teams the coach said. 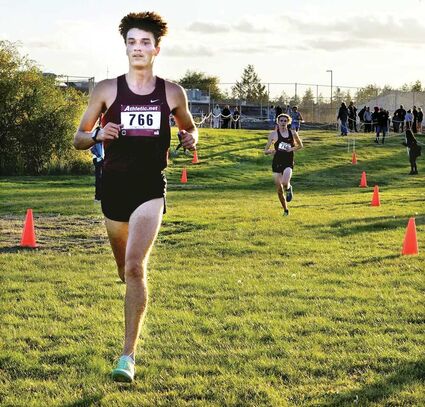 The boys varsity team finished second in the "Silver Division" against 47 teams said Blankenship. 295 runners competed in the race and the Cardinal boys had 9 personal records and 1 season best. Connor Palmen finished first for the team at 16:13 followed closely by Reid Headrick 16:16, finishing 3rd and 4th overall.

The boys JV team finished in 34th place among 41 teams, and were led by Dominick Gifford and Angel Mendez said the coach.

Blankenship said, "Next up is our League Dual Meet #3 at Newport on Wednesday October 13. Thank you to all our athletes and volunteer parents who worked our major fundraiser the following day!!! And a special thank you to the Colonel and the Medical Lake Junior ROTC for helping out!"