By From staff and news service sources 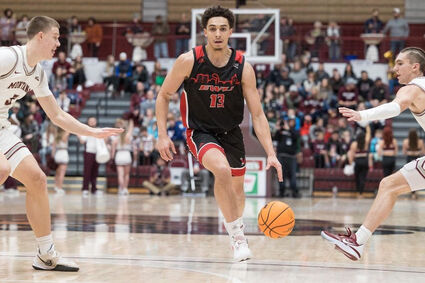 Angelo Allegri brings the ball up court at Dahlberg Arena in Missoula where his 19 points helped EWU top Montana Dec. 29.

The Eastern Washington men's basketball team did something very rare on the opening week of Big Sky Conference play beating both Montana and Montana State - on the road.

Eastern opened Dec. 29 with an 87-80 win over the University of Montana and followed that Dec. 31 defeating defending Big Sky Champions, Montana State, 70-67.

The Eagles did sweep both schools during the COVID-complicated 2020-21 season, but in the traditional schedule setting the last time the Eastern pulled off that feat was the 2014-15 season when they earned the program's second NCAA Tournament berth against Georgetown...