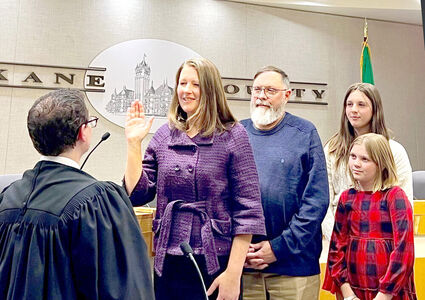 SPOKANE COUNTY - The Spokane County Commission now officially has five members. Democrats Amber Waldref and Chris Jordan have joined Republicans Al French, Josh Kerns, and Mary Kuney to form the board that will represent the residents of Spokane County. Both Waldref and Jordan were sworn in as commissioners at a ceremony held on Thursday, Dec. 22, 2022.

Spokane County Court Commissioner Michelle Ressa administered Jordan's oath of office. He will serve a two-year term as Commissioner for District 1. Chris's wife, Dr. Mara Hazeltine and his parents, Jeff and Teresa Jordan were by his side as he was sworn in.

"Thank you to my neighbors and fellow citizens in District 1 for entrusting me with the solemn responsibility of public service as county commissioner. I will do my best to work for you every day with integrity," Jordan said. "New voices are coming to the table at Spokane County, and I believe that this moment represents a chance for a fresh start."

Amber Waldref's family was present at her swearing-in, including husband Tom Flanagan and daughters Karolina and Nora. Superior Court Judge Tony Hazel administered the oath of office. Waldref will serve a four-year term as Commissioner for District 2.

"I know there will be some growing pains but I'm confident that together we can forge a path together that will deliver strong positive results for Spokane County," Waldref said. "Partnership is really the only way we will create a stronger economy for all residents, no matter what your zip code is."

In 2018 the Washington state legislature passed a law requiring a restructuring of Spokane County from three to five districts. French, Kuney, and Kerns basically won reelection this past November, although they now represent fewer constituents in their respective districts. Waldref and Jordan are starting their first terms as commissioners.