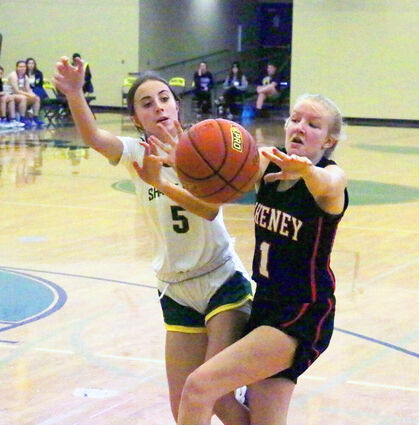 Cheney's Natalie Richards (1) and Shadle's Addison Jahn battle for a loose ball in a Dec. 17 game won by the Blackhawks 46-33.

The Medical Lake girls got their Northeast A League season off to a good start last week with a 44-13 win at Newport, Dec. 16. The previous night, Greater Spokane League North Central won 33-15 at ML.

In the win the Cardinals got the stoutest of defensive play outscoring the Grizzlies 30-2 in the first half.

"The box score is correct," head coach Brett Ward wrote in an email. "Basically, they scored two points in three quarters against our varsity kids." Medical Lake played primarily JV kids in the fourth when Newport had an 11-5 advantage.

Charde Luat had 21 points while Chloe Parsons had...