Putting Cardinal wrestling 'back on the map'

Another rung on competition ladder might be at hand 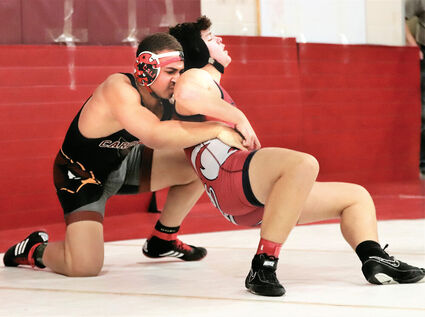 Medical Lake's True Cole, left, tries to hold onto Mount Spokane's Lance Airey as he hits a switch in the opening match at 195 pounds of the Medical Lake Scramble on Saturday, Dec. 5. Airey won by pin in 3:50.

The building blocks were placed in 2021-22 for what head coach Garrett Roulston thinks could be a resurgence for Medical Lake wrestling.

"Last year we had a really young team and a lot of freshmen - three quarters of our team were freshmen," Roulston said in a recent interview.

The result was a fifth-place finish in the Northeast A League, arguably, year-in, year-out, one of if not the most competitive 1A league in the state of Washington. The NEA has produced three of the past four state team champions, is home to the defending champs from Deer Park, plus numerous top-10 finishers.