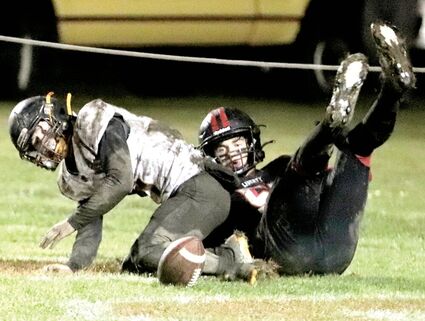 Lake Roosevelt quarterback Brit Egbert, left, and Liberty's Gunner Stephens scramble for an errant snap that rolled into the end zone. Liberty's Brandon Finau recovered the ball for a touchdown.

SPANGLE – Sometimes, a football game is decided solely on turnovers.

Such was the case Friday night, Nov. 4, when the Liberty Lancers held off the visiting Lake Roosevelt Raiders, 15-6, to advance to the state 2B football playoffs.

With a cold, steady rain and a muddy filed, the District 6/7 crossover proved to be a defensive battle, with little offense on both sides of the ball.

Two Raider fumbles and an incepted Lancer pass made the difference in the game.

The first quarter was a hard slog in the mud, with little offensive traction on either side of the ball.

With the ground game not ge...