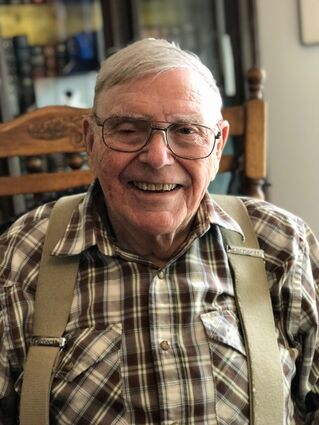 Walter Lee Powers, passed away peacefully in the comfort of his home alongside family on Sept. 19, two days after celebrating his 97th birthday. Walter is survived by his granddaughters Dulcy, Melony and Anna; his grandsons Tab and Zach; five great grandchildren; two great-great granddaughters; and two daughter-in-laws, Jeanne and Patty. He is preceded in death by his loving wife of 72 years, Myrtle Powers, and his three beloved sons Wally, Jim, and Tom Powers.

Walt was an outgoing man who was genuinely interested in learning about any person he encountered. He could captivate people with his many life stories and entertain a crowd with his strong, enchanting singing voice and infectious laugh. He enjoyed singing in the choir of the Cheney Congregational and Honolulu Union churches. Walt was a loving and supportive grandfather who was adored by his grandchildren and great grandchildren. He had a way of making people feel genuinely heard, appreciated and loved. As a father he was the stern one, softening as he became a grandfather and great grandfather. He provided many life experiences to his family over the years that will be a source of treasured memories for years to come. His life was well lived, positively impacting many along the way.

Walter Lee was born in his family home in Fort Worth, Texas on Sept. 17, 1925 to parents Howard and Nettie Powers. Most of his early years were spent during the Depression. This is where his tremendous work ethic was born at 9-years-old, selling the evening Post to earn money to buy his own clothes. Walter was drafted for military service during WWII where he served as a Navy corpsman attached to the Marines. This is where he eventually met the love of his life Myrtle, a woman Marine. Their courtship began as Walt was sent overseas, corresponding for nine months with love letters until they both were discharged from the military. They were married on Dec. 15, 1946 and attended college together at Baylor University in Waco, Texas. Walter and Myrtle's love story has a chapter in Cindy Hval's book, War Bonds: Love Stories of the Greatest Generation, which was published in 2013.

Following Myrt's graduation from Baylor, the couple moved to Oregon where Walter continued his studies at Linfield College in McMinnville. It was there that he received his B.A. degree in 1949. Walter furthered his education at University of Northern Colorado, Greely, receiving both his Masters and Doctorate degrees. It was during these years that Walt and Myrt began their family.

Walter's first son, Wally David, was born in McMinnville, Ore. on Nov. 24 ,1948, and passed away of Multiple Sclerosis in Dec. 2003. Wally was a community college instructor before becoming disabled. Their second son, James Lee, was born in Greeley, Colorado on Dec. 14, 1951. He had a career as a civilian mechanical engineer in the Department of Defense for the US Navy. Jim died unexpectedly of a heart attack in Apr. 2009. Their third son, Thomas Dean, was born in Boulder, Colo. on March 24, 1954. He had a career in School Psychology and was the only son to marry and have children. Tom passed away from cancer on Nov. 29, 2021.

In 1954, Walter moved his family to Cheney, Wash. where he began his 40 year teaching career at Eastern Washington University. His time at EWU provided the Powers family the opportunity to travel the world most notably, two years in South Korea and a year in central England. Throughout his career, Walt was recognized for his many contributions to the establishment and advancement of school counseling programs across the globe.

In retirement, Walter and Myrtle spent winters at their condo in Honolulu, summers at the cabin in Priest Lake Idaho, and the rest of the time in Cheney, close to family. Following the passing of his wife in 2017, Walter continued living in his Cheney home near the many people who knew and loved him. The family would like to extend our immense gratitude to his wonderful caregivers that allowed our Gramps to remain in his home until his passing, as was his most desired request.

It is impossible to sum up the life of a man like Walter Lee Powers. We will further honor and celebrate his 97 years with a Memorial Service to be held Sat., Nov. 5, at 1PM at the Walt and Myrtle Powers Reading Room, located on the 2nd floor of Hargreaves Hall at EWU. Virtual option TBD. In lieu of flowers, donations can be made to: The Walt Powers Scholarship Fund, Eastern Washington University.