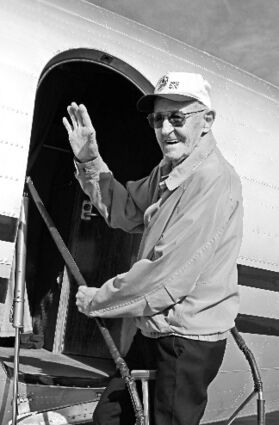 Fred was born Jan. 28, 1923 on the family farm to Fred G. and Katherine Wesselman. His boyhood years were lived on the farm near LaCrosse, Wash. He was the second of six children and graduated from LaCrosse High School in 1941. At age 16, he earned his Private Pilot's License through the Civil Aeronautics Administration. At a very early age he learned how to work on farm, auto and other mechanical equipment so that following graduation, he started farming with his family until 1961.

He met Lorene Munk when she worked the LaCrosse Café in the early 1950s. And with encouragement from her, Fred stopped flying airplanes, which led to Lorene accepting his proposal and subsequent wedding Nov. 29, 1952 at St. Xavier Catholic Church, Spokane. From this union they raised four children. He used the money from the sale of his airplane to purchase their first home in LaCrosse. Due to his health complications Fred and Lorene chose to sell the house and moved to Cheney where he started work at McMillen Implement. After a short time working there, Fred was offered a job at Sprague Equipment Company. He worked there from 1965 until his retirement in 1993. He was well known in Sprague and to local farmers for his work ethic and being able to "MacGyver" almost anything so the farmer could get the job done! He also was crewmember cleaning up the town of Sprague following the eruption of Mount St. Helens in 1980.

Anyone who knew Fred, heard of his many adventures while flying. Whether hunting from an airplane or touching down in remote areas of Washington to make field repairs. He loved to fly. He earned his Private Pilot Certificate while learning to fly Cessna 140, Waco UPF 7, Stearman Model 75, Luscombe 8A, Piper J3 Cub and Piper L4 Grasshopper in his younger years and then in retirement he continued "flying" with remote control airplanes and tinkering with anything mechanical that he could improve. While living in Sprague he served on the City Council, as a Volunteer Fire Fighter and he was a member of Mary Queen of Heaven Catholic Church.

Family members who will greatly miss him are his remaining three children, Diana (Wesley), Dennis and David (Traci); 6 grandchildren and 12 greatgrandchildren. Brother Ray and sister Janet Parker and numerous nephews and nieces.

Should friends desire, memorials may be directed to Union Gospel Mission in Fred's name.