Blackhawks add to own demise

Cheney fades in second half in 27-8 loss to University. 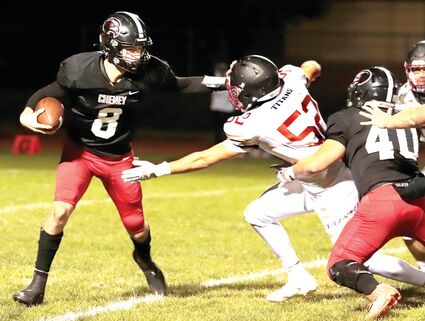 Cheney quarterback Jakeb Vallance, a 6-foot-4, 195-pound senior, stiffarms University senior Lucas Reynolds as he tries to break through the line of scrimmage.

The University Titans left Cheney on Sept. 23 with a solid 27-8 Greater Spokane League football win where they rolled up nearly 300 total yards and got a pair of touchdowns from Malaki Miller.

But the Blackhawks contributed mightily to the outcome in the game at Tom Oswald Field according to head coach Bobby Byrd.

"The U-High defensive front was good, but at the end of the night it was our own mistakes that defeated us," Byrd wrote in an email. "We had opportunities and big plays that were called back."