By Drew Lawson
The Record-Times 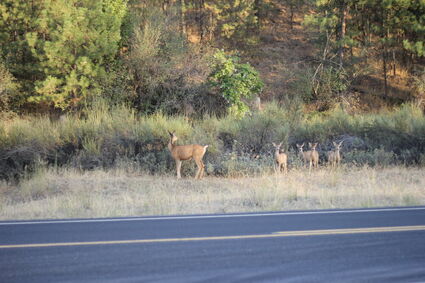 A doe and her fawns move through brush in Seven Bays Sunday, Sept. 4. These animals aren't legal to hunt during the fall season, but bucks will be beginning Oct. 15.

CHENEY-A flip of the calendar to September means that for most seasons, it's time to hunt. Many big game, small game and bird hunts began Sept. 1, while others begin later in the month or into October.

The hunting season looks more promising for deer opposed to last year, when the animal was ravaged by disease that particularly hit white-tail populations.

"Last year really took a toll on white-tail especially, but we saw it in mule deer too," Fish and Wildlife Officer JoLynn Beauchene said. "But I haven't gotten any report of bluetongue this spring...I'm guessing that's going to have an e...