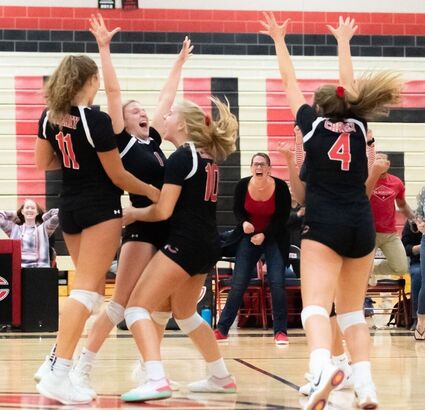 Heather Zorrozua will be in her ninth season as head volleyball coach at Cheney.

There's some excitement in Heather Zorrozua's voice for a variety of reasons as she leads her Cheney Blackhawks volleyball team into the 2022 season.

One is the prospect of the experience her team possesses. There's also the ever-expanding foundation that appears to be being built with the program. And, as other coaches have echoed, hopefully the currently waning specter of COVID-19 continues to be just a memory.

Cheney technically enters its third season as a 3A school member of the Greater Spokane League, but 2020 was compromised by the coronavirus. "So, it wasn't really a real season in terms of playing the teams and all that jazz," Zorrozua said.

Consider 2021 the first real season in the GSL where the Blackhawks finished 1-8 in GSL play and 3-13 overall. Zorrozua reminded, however, there were no seniors on varsity.

"I joked with someone the other day, (that) we kind of we build and then we start over," Zorrozua said. "Last year was really the year of solidifying that building process."

The result is there are 11 seniors and three juniors on varsity on the 14-player squad. Basically, the team from last year is returning with the addition of some JV players.

But the bigger news is that across-the-board turnout was huge for Zorrozua who enters her ninth season as head coach. "This was my biggest year in terms of tryouts - 110 athletes," Zorrozua said.

It is also the first time that she has limited the numbers who will make the various teams - varsity, JV and C-squads - meaning players will have to put in the extra work necessary to be competitive.

Speaking to specifics, Zorrozua pointed to a handful of players whom she considers critical cogs in Cheney's climb upwards.

Junior, Sophia Coffin, is the libero and, "She's definitely one that's gonna' be a huge impact player this year," Zorrozua predicted.

Navidad Islam-Zwarta is a senior middle. "She's really flourished since last year," with club and, for the first time for Cheney, summer league play.

Senior Ryann Robbins was a captain from last year. "She's an outside (hitter) and if we can get her over this tiny little hump she's in, I think she's gonna' surprise a lot of people as well," according to Zorrozua.

Finally, there's Joy Clara Assonken, a junior. "She will be a tough one to stop on the outside as she has continued to build her toolbox of tricks," Zorrozua said.

"This is gonna' sound super cliche, but why I'm carrying 14 is on any given day any of them can shine," Zorrozua explained.

Zorrozua came to the Northwest from Sonoma, Calif. and played collegiately on a full-ride scholarship at Gonzaga. She is a counselor at Cheney Middle School and maybe likes to draw from that "day job" and looks beyond the athletics element of her sport as a tool for life after volleyball.

"I played college volleyball and so I just feel playing a sport, or multiple sports, really helps balance life in general," she said. Zorrozua's a walking example of that as she is a married working mother who coaches and is going back to school for an advanced degree.

Cheney will play in the Shadle Park Jamboree on Sept. 1 and open GSL play at Rogers, Sept. 6.