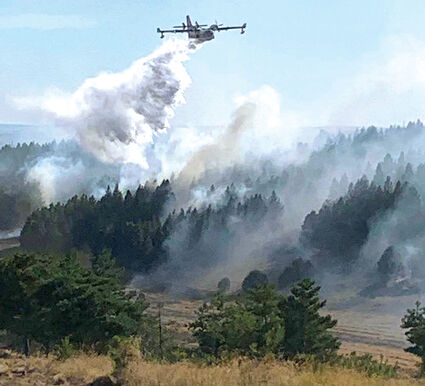 A fire bomber drops water on the Hole in the Ground Fire.

PINE CITY - Volunteer firefighters from across the county were pitted against two wildfires this past week, successfully extinguishing both with the help of state fire services.

On Thursday, Aug. 11, volunteers from Rosalia's Whitman County Fire District 7 were tasked with investigating the source of smoke in the Hole in the Ground area north of Rock Lake.

The responders located a growing fire burning in rocky and timbered terrain that reportedly made access difficult.

Nearby state Department of Natural Resource crews followed to investigate the smoke as well, and assisted volunteers on the ground and in the air with a helicopter, successfully containing the blaze to an area of 3 acres.

Firefighters from districts in Oakesdale and St. John were also mobilized to put out the burn, which was extinguished by nightfall Thursday evening.

A second fire appeared in the Rock Lake area the following afternoon on Friday, Aug. 12.

The wildland fire was estimated to have begun around 1:00 p.m. near Miller Road north of Ewan.

Volunteer firefighters from St. John initially responded to the burn, but volunteers in Lamont, Steptoe, and Rosalia were later called to the scene via a mutual aid request. 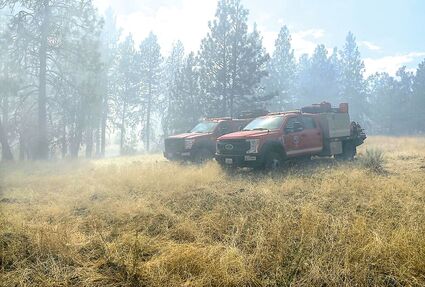 These requests are called for "Anytime local resources are overwhelmed and you have expended local assets," said Tensefeld.

Gibson's request was granted, and two 'super scooper' planes responded to battle the fire from above.

"They just dipped out of Rock Lake and dumped it on the timber," explained Tensefeld, "that was just the right tool for the job that day."

While homes were reportedly threatened, no evacuations were ordered.

County officials reported that by Friday night the fire had been extinguished, scorching a rough total of about 200 acres.