By Roger Harnack
The Free Press

City Hall to be used as 'cooling center'

Temperature expected to reach 103 by Friday 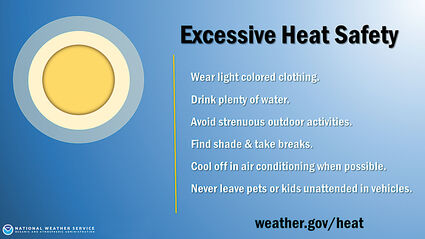 CHENEY – The city is getting ready for triple-digit heat this week by opening City Hall as a cooling center.

"Due to the extreme heat we are experiencing over the next several days, the city of Cheney is opening up the lobby and auditorium at City Hall as a cooling center," a statement released by the city said. "Anyone in need of relief from the heat is welcome to come cool off at City Hall between the hours of 8 a.m. and 5 p.m. July 26-29."

The announcement comes as the National Weather Service predicts temperatures this week re...