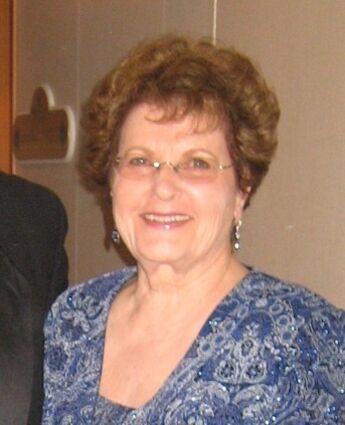 It is with profound sadness that the Hale Family announces the passing of its matriarch, Mary Kaye Hale, 87, and longtime Cheney resident, on June 19, 2022. She will be laid to rest on July 2, 2022, with services at Cheney's St. Rose of Lima Catholic Church at 10:00 am with reception following and an interment at 1:00 pm at Holy Cross Cemetery, North Spokane. As a Colville tribal member, Kaye will be buried in honor of her proud Indian heritage in a Pendleton-draped blanket and wooden coffin befitting a Colville elder.

Mary Kaye Hale was born in Inchelium, Wash. to John and Letha Perkins on April 6, 1935. Her birthplace is in a location that is now under the water line of Lake Roosevelt, the lake produced by the dam at Grand Coulee. Letha raised Kaye by herself since Kaye was just 8 years old after John's untimely accidental death while building the Fort Spokane bridge. Letha and Kaye eventually moved to Spokane where, in 1955, Kaye graduated from Marycliff High School and began her nursing studies at Gonzaga University. The following year, while visiting her aunt in Bryan, Texas, she met and soon after, married Alan Hale, an Air Force pilot and began a new career as a homemaker. Kaye and Alan had six boys (Steven, John, Mark, Phil, Chris, and Brian), adopt a 16-year-old girl (Brenda), and all-but adopted a foreign Chinese student (Zheng Yu).

While raising the kids, Kaye embarked on a life-long trek to discover her family's ancestry and share it with all who were interested. From her family's original European migration to the United States, to Hudson Bay fur traders, to the Nez Pierce and Colville Confederated tribes, Kaye's passion was to learn her ancestry then share her collective knowledge with her family and those that inquired along the way. Kaye became a member of the Daughters of the American Revolution and was welcomed as a guest researcher for the Smithsonian's National Museum of the American Indian in Chicago and Washington DC. Her research fills binders enjoyed by many throughout this great country.

Upon Alan's retirement from the military, the family moved to Cheney, Wash. in 1981 where Alan became a college professor at Eastern Washington University (EWU). Kaye relished the opportunity to return to the Spokane area where she could care for her mother and spend weekends at their lake place near Inchelium. In 1993, Kaye and Alan started XN Technologies, located in Cheney, where it designed, manufactured, and sold its audio-visual products globally.

Alan and Kaye sold XN Technologies in 2006 to start a charter aircraft company, XN Air, and eventually sell that company in 2011 to retire once again.

Alan passed away July 2, 2012, from cancer. Kaye would continue to care for her family as long as she was able until her death on June 19, 2022. Kaye will be buried ten years to the day of Alan's passing and laid to rest next to the man she loved so dearly. She will be greatly missed.