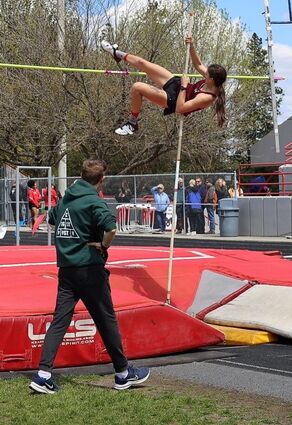 CHENEY- Sixteen Medical Lake athletes have qualified for the WIAA State Track and Field Championship meet held at Eastern Washington University on May 26–28.

The qualifying meet was held May 20–21 at Riverside High School. Head Coach Gene Blankenship said the weather was unfavorable, but the team still did very well.

"Friday preliminaries were accompanied by lightning strikes, thunder, wind, and rain," Blankenship said. "Saturday finals were cold and windy and the rain started again just before the 4×400 relays. Over the two days our girls' team collected 14 personal records (PR) and our boys' team 11 PRs. Our athletes handled it though, in an excellent manner."

The girls' team qualified to compete in 10 events at state. And in true Cardinal fashion, many of the runners were on that list.

Sophie Salinas-Sanders placed first in the 100 meter dash recording a time of 12.84 seconds. Salinas-Sanders also posted a 15'–11" mark to place second in the long jump.

Kylie Constantine was second in the ambulatory 100 meter race finishing in 20.4 seconds. Blankenship said Medical Lake Track and Field is doing everything to increase participation in ambulatory and wheelchair events.

"This is my first year of having athletes participate in ambulatory events," Blankenship said. "And I am really excited at Kylie's success. She qualified for State in the 100 meter ambulatory race, but just missed qualifying for discus."

"We also went third through fifth in that event," Blankenship said.

Chiche Okemgbo had a standout performance at the meet, finishing first in the shot with a toss of 33-3.5, placing second in the javelin with a throw of 98 feet and second in the triple jump with a 33-04.75 mark.

Amblessed Okemgbo took first in the discus with a throw of 114-feet.

"I am so proud of all of my throwers," Coach Katrina Furness said.

Reid Headrick led the Cardinals distance runners with a first-place finish in the 800 meters, crossing the finish line at 1:57.51. Blankenship said Headrick also outran the competition to take first in the 1600 meter race with a time of 4:40.86. He also anchored the second-place 4×400 relay team.

Distance runner Connor Palmen finished out of the top three but qualified for State.

"Connor Palmen finished fourth in the 800 meter," Blankenship said. "But (Palmen) was still able to qualify for State with a time of 2:00.48."

Elijah Scott placed third in the 300 meter hurdles with a time of 43.81 seconds.

Tyson Cooper finished second in the shot put with a throw of 45'-2."

Blankenship said the Cardinals turned in a memorable performance.

"Overall, he said, "We saw our best performance at Districts in my 12 years of coaching in Medical Lake."