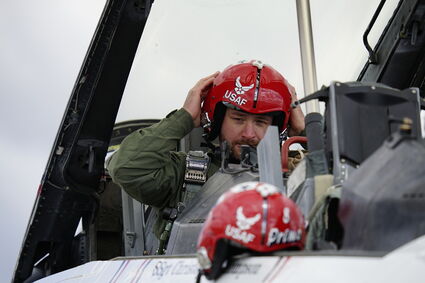 Airway Heights Youth Engagement Specialist Officer Patrick Carbaugh puts on a helmet and gets ready for his Hometown Hero flight with the Air Force Thunderbirds.

FAIRCHILD AFB – Airway Heights Youth Engagement Specialist (YES) Officer Patrick Carbaugh got the chance to fly with the Air Force Thunderbirds after being nominated as a Hometown Hero for the region.

"It was super intense and exciting," Carbaugh said. "There was a moment where I thought I might get sick but I held on and didn...