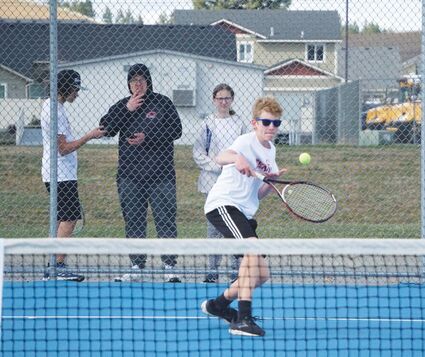 The Blackhawks Jacob Estock returns a back-handed shot to his opponent. Estock recorded the lone win in the teams match with Lewis & Clark.

CHENEY- Back-to-back losses to Ferris and Lewis & Clark last week has the Blackhawks sitting at 2–4 in the Greater Spokane League standings and 5–5 overall with two matches left before the Inland Empire Tournament on Friday.

Cheney had momentum on its side when the team hit the road to take on the Saxons on Tuesday, April 19 having pulled out a 4-3 over North Central a few days prior. But the Blackhawks were not able to capitalize on it and dropped the match, 6-1.

"Their first three singles were incredible-I thought our guys played well, but we were just outmatched," Coach Dan Estoc...