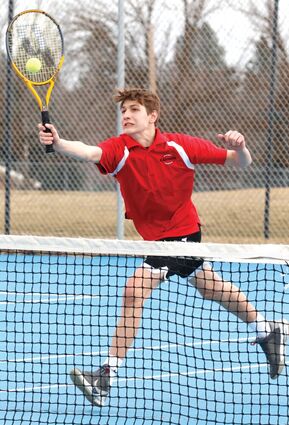 Kaiden Vollan sends a hard volley back to the Shadle Park side of the court.

CHENEY-Cheney opened season play with a loss and a win in nonleague action. The Blackhawks dropped a 5-2 match at West Valley on March 15 and then beat Shadle Park by the identical 5-2 score at home on March 17 to even their record at 1–1.

"Both contests were very closely contested. Our boys narrowly came up shy on a few close games against West Valley, including five tie-breakers. Unfortunately, we only won two of the five, but the outcome of those tie-breakers could have easily reversed the team score," coach Dan Estock said. "Our match against Shadle Park included an unusual amount of...