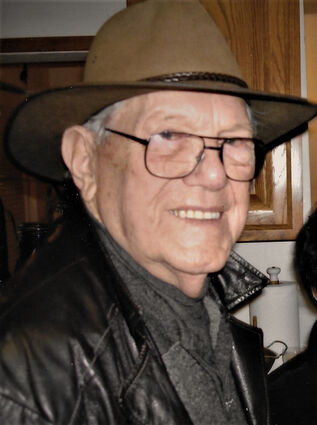 Paul William Butler, known as Bill to his friends, passed away on March 3rd, 2022, at the Spokane Veterans Home, Spokane Wash. Bill was born on April 3rd, 1923, to Paul and Jessie Butler of Wellsboro, Pa. The first of four children, Bill started his career as a tool and die maker for the Corning Corporation, but like most of his generation was called to serve his country in World War II.

At the age of 19 Bill found himself piloting a B-24 Liberator as part of the 740th Bomb Squadron, 455th Bomb Group under the command of Col. Kenneth A. Cool. The 455th flew 252 combat missions over France, Italy, Germany, Poland, Hungary, Austria, and the Balkans. Bill was shot down 5 times, but returned to his Squadron every time and completed 50 bombing missions. Bill lost many friends during the war and even late in his life had a hard time speaking of it. He would speak of his good experiences during that time, including running a garrison in the Italian town Oppido Lucano, and the wonderful people he met there. He also served directly under 5 star General Henry (Hap) Arnold.

He spoke 6 languages, and upon going to Germany, became the first non-German to go to Jaeger school and become a Jaeger (a German hunter/game warden). He was an expert marksman and was on the Air Force Weapons Exposition Team, the Air Force Skeet Team and Trap Team. He was also on his base’s bowling team that won the Air Force Championship.

After his tour Bill met the love of his life Dorothy (Dottie) Shapiro who was in the Women’s Army Air Corp at a USO Dance. Married in 1945 Bill and Dottie had three children and moved between several Air Force bases from Germany to Alaska before settling at Geiger Air Force Base and making their forever home on 3rd street in Cheney, Wash. After retiring from the Air Force, Bill and Dottie opened Bill Butler’s Boat House on North Silver Lake in 1965. As an avid outdoorsman and conservationist Bill was active in several local groups including the Inland Northwest Wildlife Council and the Inland Empire Fly Fishing club, he also taught a course on Fly Tying at Spokane Falls Community College. Bill was one of a select few licensed by the state to trap quail for transplant and received an award for his years of work. He had an incredible talent for training bird dogs and all those who had hunted behind them will tell you they were the best they had ever seen.

Bill will be remembered for his love of people and wildlife, his kindness to strangers, and his service to his community and for doing his part to make the world better than he found it for future generations.

Services with military funeral honors will be held at the WA State Veterans Cemetery, Medical Lake where he will be laid to rest next to his beloved Dottie.

In lieu of flowers the family asks that donations go to Bill’s favorite charity The Shriners Children’s Hospital of Spokane by calling 509-744-1242.