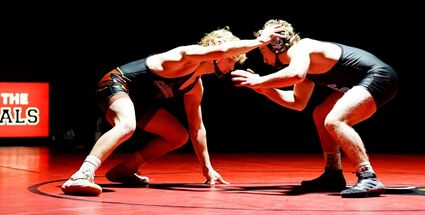 Medical Lake's Isaac Kain holds back his opponent Drew Bergstrom at the beginning of the 126-pound match.

MEDICAL LAKE – The Cardinal wrestling team hosted Freeman High School on January 11, and Aden Carl continues to have an undefeated season winning his match in the 132-pound class.

Overall, both teams scored 36 points and Medical Lake won on criterion, and the Cardinals racked up some early points winning by forfeit in several weight classes.

The 160-pound class wrestled first, and Jonah Orndorff from Freeman pinned Medical Lake's Sheehan Connors to win the first match of the night.