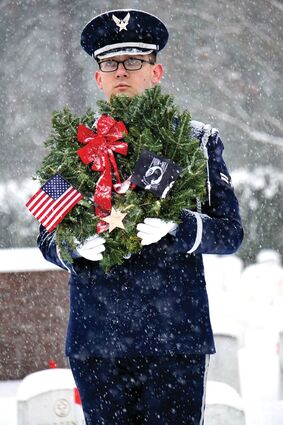 Photos by Matthew O. Stephens Hundreds of area residents participated in the annual Wreaths Across America Ceremony at Fort George Wright Military Cemetery in Spokane on December 18. The silence was almost tangible as the snow softly fell and people paid their respects.

SPOKANE – A blanket of snow quieted the atmosphere on December 18, which marks the day in which over 2500 locations across America honor fallen Veterans by placing donated wreaths at their graves. Fairchild Air Force Base invited people in the area to come participate at Fort George Wright Military Cemetery in Spokane, and a couple hundred residents braved the snowfall to show their respects.

Nationwide over 2.4 million wreaths were placed on the graves of veteran's statistics show, and 254 were placed at Fort George Wright Cemetery.