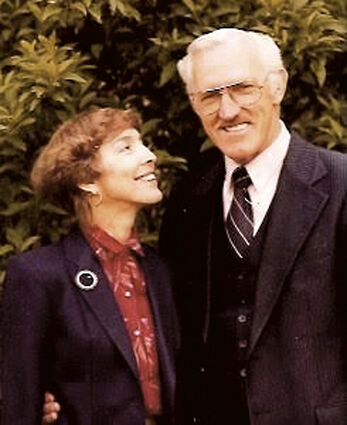 Surrounded by his children, Elroy C. McDermott peacefully passed away on Nov. 14, 2021. He is survived by his daughters Christie L. McDermott, Shelly Tracy (Von R Tracy), Lorraine Jones, (Loyal Allen), Elizabeth Jones, his son, Patrick E. McDermott (Angie McDermott), his 19 grandchildren and 39 great- grandchildren. Elroy was born to George Fisher McDermott and Berniece Casperson in Clifton, Idaho on Dec. 22, 1933. He is survived by nine of his brothers and sisters whom he loved dearly.

Elroy spent his early years herding sheep along with his father and sister; his mother was extremely ill and would watch as her family worked the sheep, sometimes from a covered wagon and other times from a cart Elroy would use to pull her. His mother passed away when Elroy was 13 years old.

He graduated from high school in Dayton, Idaho in 1952 where he participated in football, basketball, baseball, and was also student body president his senior year. Elroy then attended Weber State College in Ogden, Utah on a basketball scholarship, for one year. He left Weber to fulfill a mission for The Church of Jesus Christ of Latter-day Saints, from 1954 to 1956, in Tenn. and other east central states.

Upon returning home he met and courted the love of his life, Darrelyn Owens. They married in the Logan, Utah Temple for time and eternity. Elroy graduated with a bachelor's degree in Economics in 1960. In 1961 Elroy and Darrelyn moved their small family to Bozeman, Mont. to direct the LDS Institute of Religion and to begin graduate studies at Montana State University. His master's degree was attained in 1963 and his Doctoral degree in Economics, in 1965.

From 1965 to 1997 Elroy was an administrator and professor at EWU. While there, he was Chairman of the Department of Management, President of the Faculty, Chairman of the Academic Senate, Washington State Chair of the Council for Faculty Representatives for Public Higher Education, and later the Dean of the College of Business and Public Administration (1994-1997).  Elroy was an honored recipient of the Trustee's Medal, which is the highest recognition given by the University. He always did his best to serve his colleagues, students and community. In 1997 he retired 31 years after beginning his career in the Cheney area.

Elroy and his son, Patrick E. McDermott then opened Premier Mortgage NW, a Mortgage Bank and Development Company in Spokane Wash.  They helped many families, businesses and individuals from 1998 to 2010.

Elroy's spiritual life mirrored his work ethic in teaching and leadership opportunities; he was called to be Bishop of the Cheney Ward of the Church of Jesus Christ of Latter-day Saints and years later, Stake President of the Spokane West Stake. He loved serving others, which was evident in all he did. Elroy loved his Savior Jesus Christ and diligently worked to emulate Him daily. At the end of his life, he looked forward to reuniting with his sweetheart of 61 years who had passed away 3 years earlier.