Another rally is planned for Thursday 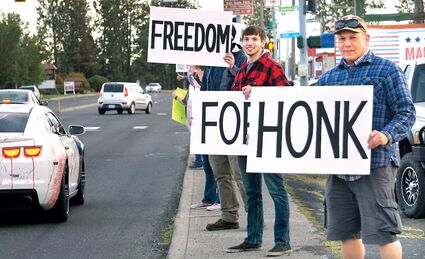 The march was the culmination of a rally that began beneath the gazebo at Sutton Park, where 6th Legislative District Rep. Mike Voltz, R-Spokane, spoke out against the Gov. Jay Inslee’s vaccine requirements for state workers and school employees.

“This is not a Republican, Democrat issue,” Volz said. “This is a people issue.”

The “anti-mandate” group consisted of concerned co-workers who have been meeting at the park every Thursday for the past four weeks.

One event boasted nearly 40 attendees and continues to grow due to a grassroots campaign through social media, rally signs and word of mouth.

“We’re getting people from all across the spectrum with concerns,” Volz said. “We’ve heard from nurses, front-line healthcare workers, firefighters, policemen, public employees.

“We’ve heard from a broad spectrum of public employees who are very concerned and worried about taking a vaccine that they don’t want.”

Voltz said he isn’t anti-vaccine – he has received the shot – but he’s worried about the infringement of personal liberties.

He said he believes that the decision should be left to the individual, with consultation from a medical professional.

Others in the audience, during a question-and-answer session, espoused similar views regarding governmental overreach and the use of “coercive techniques” to get the community vaccinated. “It’s not about health, it’s an overreach of government under the guise of a health emergency,” one attendee said.

“Despite your understanding of the information, and your own personal decision, people are being forced into taking the vaccine or losing their job,” he said. “That is a threat.”

He said the system is being used as a means to bully people into submission, akin to blackmailing.

The state Department of Health coronavirus dashboard shows that 4,349,128 residents are “fully vaccinated,” meaning one or two shots depending on the vaccine. With an estimated 7,656,200 residents, that means only 56.8% are considered fully vaccinated.

Only 46.8% of the population is fully vaccinated, state data shows.

Cheney’s inoculation rate is lower, with health officials reporting that only 47% of residents ages 12 and older have received a single shot in the 99004 ZIP code. Only one vaccine is considered “fully vaccinated” in one shot.

And even those considered fully vaccinated, are being encouraged to get booster shots because vaccine efficacy declines rapidly.

“People are confused about why we’re not getting the vaccine,” organizer Victoria Smith said. “It’s hard to get word out because it’s an emotional topic.

Scott Davis can be reached at news@cheneyfreepress.com