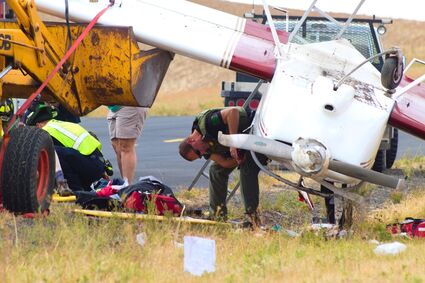 Justin Slayton I The Gazette

PALOUSE – Two people were injured when a small plane crashed at a private airfield near Palouse on Sept. 15.

The plane crashed at Schoepflin Airport on Ringo Road at around 11 a.m., according to Whitman County Sheriff Brett Myers.

“Initial reports indicate the student pilot, accompanied by his flight instructor, attempted to make a landing when the plane made a hard touchdown causing the landing gear to malfunction,” said Myers. “As a result, the plane flipped and came to rest on its top.”

The two male occupants were taken to area hospitals for injuries. They were not life-thre...