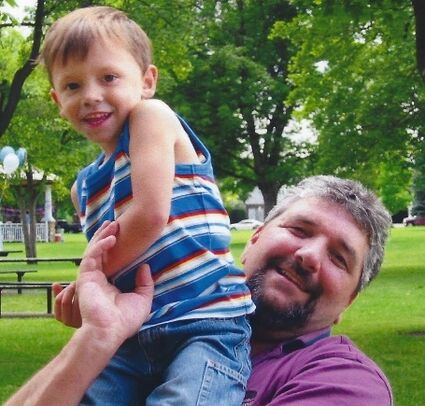 Chris graduated from Cheney High School in 1978 where he played football and wrestled. He worked 29 years and retired as Shipping Supervisor from Snyder's/ Franz Bakery.

Chris was an avid fantasy football and sports fan, and his favorite teams were the Zags, Cougs, Seahawks, and Mariners. He liked fast cars especially his last one, a royal blue Maserati.

While Chris was always a hat collector, he believes his liver donor passed on a love of fancy hats. After the transplant he started wearing unique hats including Fedoras, Panamá's, Homburgs, and Cowboy hats. He would wait weeks for them to be shipped from around the world.

Chris was known to channel Elvis and be the life of any party. He had many, many friends who live far and wide. Mostly, Chris was especially fond of his grandchildren, to them he was "Papa Chris", and was the No.1 fan of his grandson Justin, also a wrestler. He never missed a match.

His family is comforted in knowing he is finally at rest with his sister Shelley and what a wonderful reunion they had.

A memorial service is scheduled for Sat., Aug. 7, 2021; 11 a.m. at Cheney Funeral Chapel, 1632 W. 1st St., Cheney, immediately followed by an open house until 3 p.m. in the Ballroom at the Holiday Inn Express & Suites Cheney, 111 Betz Road, Cheney. All are welcome to attend and celebrate Chris' life.

Donations in Chris' honor can be made to the Transplant House, a home-away-from home for transplant patients and their families. https://www.transplanthouse.org/