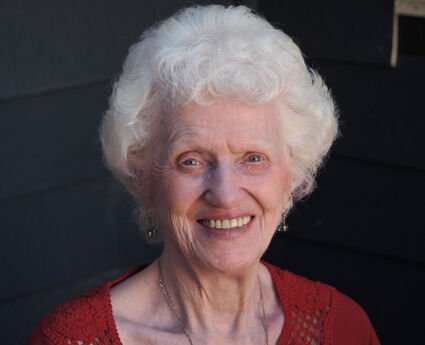 Ruth Moen Beck, 99, passed away July 17, 2021. Ruth was born on July 10, 1922. She was the daughter of Anton and Sigrid Moen, immigrants from Norway who met in Spokane. She was born in Cocalalla, Idaho to a mother grieving her husband’s recent death and caring for seven other children. Ruth died 99 years later in Spokane, Wash.

Spend much time with Ruth Beck toward the end of her life and she would tell you, “I have 6 wonderful children — Berta, Carol Audie, Tommy, Debbie, Terry.” Other memories faded, but her children were always foremost in her mind. This emphasis on her children — on family — illustrates her priorities and how she lived her life.

In March of 1940, 17-year old Ruth married Wesley Morris Beck, a handsome young man from Post Falls, Idaho. They would remain married until Wesley’s death 59 years later. After Ruth graduated from Coeur d’Alene High School, she and Wes moved in together and had three girls (Roberta, Carol, and Audrey) in less than four years. Four years later they welcomed a son (Thomas). Five more years brought Deborah, with Terence following four years after that.

It was a long period of raising children and making a home. One of the ways Ruth showed love was feeding people. Her children all remember coming home from school to the smell of fresh bread. She made one heck of a breakfast, cooking it at all hours when Wes left or returned home from his job on the railroad and when her children (or her children’s friends) needed it. She was famous for her dinner rolls and no family gathering was complete without them.

Before Ruth’s youngest child started first grade, Jay Wheeler was born, the first of what would become 24 grandchildren. After a grandchild’s birth, Ruth always showed up to help. She loved babies and children, especially when they were related to her. She leaves behind 38 great-grandchildren, and six great-great-grandchildren.

Ruth was a woman of faith. She sang in the church choir, attended Bible studies, taught an adult Sunday school class, and prayed daily for her family. She understood what it was to not have enough and she cared for those she saw who were in need.

Ruth remained involved with her family, and as the last one left the nest, she began to expand her horizons. She connected with her relatives in Norway, studying Norwegian and traveling several times to meet cousins and visit the family farm. She hosted visits from Norwegian relatives here. She joined bowling leagues, organized family reunions, and did extensive genealogical research.

Ruth was an individual and an early adopter. She was the first person many of us knew who owned a microwave and a Macintosh computer. She painted their home a shade of pink that positively glowed. She was a snappy dresser with a sense of style.

Mom, you called your children wonderful. That says more about you than it says about us. You had the ability to see the best in us — to see the wonder. To you we were smart, beautiful, and important. You loved us well and in doing so, you showed us how to love others well. Thank you.

A memorial service and burial will be held Monday, Aug. 9, 2021 at 10:30 a.m. at Fairmount Cemetery (5200 W. Wellesley Ave, Spokane, WA 99205). Those who knew Ruth can leave an online remembrance or condolence at http://www.HennesseyFuneralHomes.com.