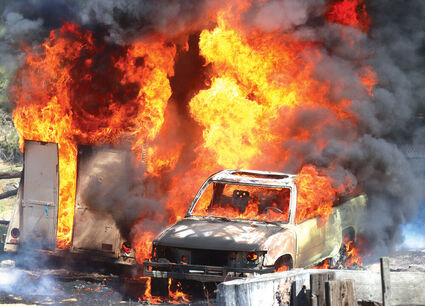 Flames erupt from a pickup truck and horse trailer Monday as a fire spreads to the vehicles at a home at 27225 S. Phillips Road, southeast of Cheney.

CHENEY - The Andrus Fire continued to burn Tuesday night, prompting evacuation notices to remain in effect north of the city and east of Four Lakes.

The cause of that blaze - the largest and most recent of three in the area since Friday - remains under investigation, Spokane County Fire District No. 3 Chief Cody Rohrbach said, noting there hasn't been any injuries or home losses.

The other fires were reported on Phillips Road, south of Cheney, and near the intersection of Sixth Street and Simpson Parkway.

As of press time, the Andrus Fire was estimated at 300 acres and growing; it was not c...