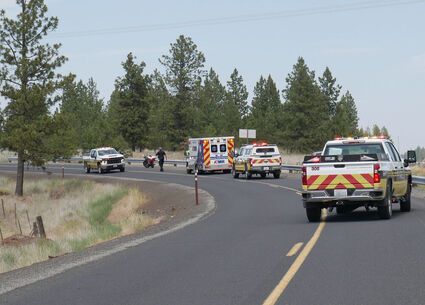 TYLER -- An apparent missed turn claimed the life of an adult male Thursday afternoon near Interstate 90 west of Cheney.

According to the Spokane County Sheriff's Office, deputies responded at approximately 2:40 p.m. to a report of a motorcycle crash on South Malloy Prairie Road and South Harrison Road, just west of I-90. Callers reported the rider was severely injured and not moving/

Spokane County Fire District 3 personnel arrived and provided medical aid, but the male rider, in his 20s, of the Harley Davidson motorcycle was pronounced deceased at the scene. Initial information indicates the motorcycle was traveling north on Malloy Prairie when the rider failed to negotiate a curve in the roadway. The motorcycle struck the guardrail, ejecting the rider. Despite wearing a helmet, the rider sustained severe injuries.

South Malloy Prairie Road, in the area of Harrison Road, was expected to be closed for several hours while the investigation continued.