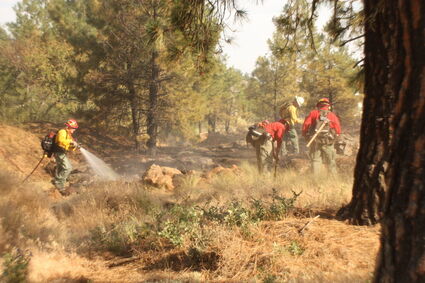 CHENEY – Firefighters extinguished a brush fire that started at the intersection of North 6th Street and Simpson-Parkway on July 1. The fire was called in at 4:07 p.m., and by 5:45 p.m. it was under control and the fire district is confident it will not spread beyond the acre and a half it had already reached.

As a precaution, the city issued a Level 1 evacuation for residents in the area. Level 1 advises nearby residents to be prepared to leave should a fire spread.

Fire officials stated the blaze was by an adolescent playing with fire. The urban interface inside the city allowed the fire to spread quickly.

Spokane County Fire District 3 was assisted by Airway Heights and the Washington State Department of Natural Resources in quenching the flames. Two airplanes were used to help contain the fire. The AMR was also there for firefighter safety.

Riley is a 2021 summer reporting intern from Western Washington University. Her internship is based in Cheney and sponsored by the International Society of Weekly Newspaper Editors.