Stealing from the community 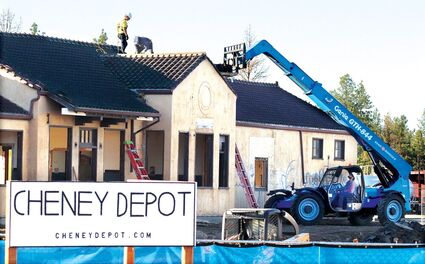 Contractors work on restoration of the then-recently relocated Cheney Depot's roof in this file photo from October 2020. Two pallets of nearly 100-year-old historical bricks have been reported stolen from the Depot site.

CHENEY - Sue Beeman and other Cheney Depot Society members have a message to the individual, or individuals who recently stole bricks from the site of the relocated historic railroad station - you didn't steal from them, you stole from the community.

"We had a pretty large time investment," Beeman said of volunteers who have worked on restoring the 93-year-old building. "There are a lot of people who have worked really hard to benefit the community."

Beeman said she discovered the theft Wednesday afternoon, June 9, while visiting the site at 15 Union St. A number of broken and half-sized bricks in a pile near the front of the property along 1st Street were gone, but more specifically, two shrink-wrapped pallets behind the building were also missing. The bricks - which were not new but from the original construction - had been put there as part of the staging process to reconstruct the building's chimney.

A total of 544 bricks are missing, Beeman said, with a replacement cost of over $850, plus tax and any shipping charges. But since they were from the depot's original construction in the 1920s, replacing them with a modern equivalent wouldn't be quite the same, making the bricks essentially priceless.

"It won't be an exact match," Beeman said. "We can get them in roughly the same size, but they won't be materially the same."

The depot - which served as a gateway to the community for decades - was moved from its previous location east of the Burlington Northern Santa Fe Railway tracks near the ADM facility last July. The roughly five-block move to its new location was done by Mount Vernon-based movers D.B. Davis, and took several hours.

One of the main reasons D.B. Davis was selected was because of their ability to move the depot intact and in one-piece, rather than cutting it into three sections as other moving contractors suggested. Part of the challenge in the move was clearing city power lines as it cross the Cheney-Spangle Road - and one way to help in that process was to dismantle the chimney.

Beeman said volunteers spent many hours removing the chimney carefully, brick by brick, cleaning each brick, removing existing mortar and then stacking them on pallets which were wrapped in plastic to protect them from weather. The Society had hoped to reinstall the chimney last fall, but colder weather preventing proper curing of the mortar prevented that, and the wrapped pallets were also then covered in tarps for protection.

Those were recently removed, and the brick staged for lifting in order to reconstruct the chimney, which Beeman said they had planned to complete by the end of June.

"Somebody just kicked a big hole in that priority," she added.

Beeman suspects the theft occurred over the previous 7 – 10 days. She called Cheney police to report the incident last Wednesday, talking to Officer Cheyanne Walters on the phone. Beeman told Walters there were no surveillance cameras in place on or near the property.

"Due to the lack of physical evidence, eyewitnesses or suspects in this case it should be considered closed/inactive until further information comes to light," Walters wrote.

Cheney Police Capt. Nate Conley said confirmed there were no suspects or other leads at this time. He added that "unfortunately" theft of construction materials is fairly common.

"I can't say we have experienced a spike, but that would not surprise me given the current prices of materials," Conley added.

Beeman said they were holding out hope that whoever took the bricks would experience a change of heart when finding out what their value to the community actually was, and elect to return them - which the Society would gladly do with no questions asked. She said volunteers didn't have to treat them so carefully when removing the chimney for the move, but did so out of dedication to the historical nature and integrity of the depot within the community.

"Not being able to reuse those same materials, it's a big disappointment," Beeman added.