Seattle golfer wins by a stroke for $10,000 payday 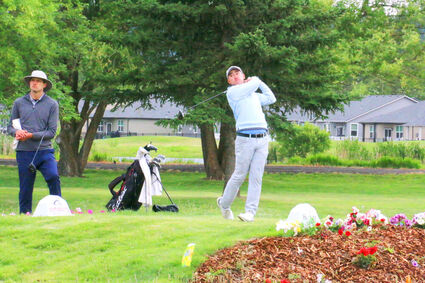 WEST TERRACE — The winds that had blown heartily and in all directions most of the weekend at the Fairways Golf Course during the 57th edition of the Lilac City Invitational seemed to be at Li Wang’s back for the final third of play in the 54-hole event.

After battling first and second-round leader Brad Marek throughout the early part of the day, Wang, the 26-year-old pro from the Seattle area, took the lead for good on the over-the-water Par-3 13th.

Marek’s second consecutive 72 meant he would fall short once again by a single stroke, as he did in 2020 to Jamie Hall. Shriners Hospital of Spokane also collected a $5,000 donation.

Marek, from Alameda, Calif. opened play with a 66, a rare feat considering the wind that was even more prevalent than usual at the course and had a five-shot lead over Wang. That shrunk by a stroke after 36 holes as Marek brought a four-shot lead into the final round. Wang would draw even on the par-5 fifth.