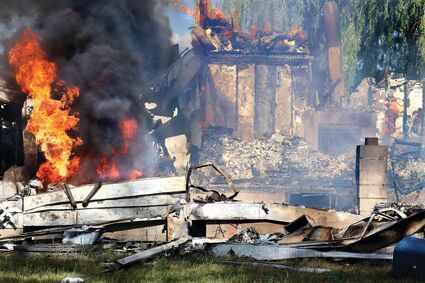 A fire destroyed this house on State Route 902 near Medical Lake.

A house fire burned on State Route 902 near Medical Lake on June 16. The Fire Department was called to 14814 W. at 12:45 p.m. to find the fire already well established. By 4:30 p.m. the fire was still going. A vent pipe for a fuel tank had recently been refilled, causing the fire to flare up every few minutes.

Spokane County Fire District 3 responded to the call. They were assisted by the Washington Department of Natural Resources and the city of Spokane in calming the flames. The cause of the fire is still under investigation.

The two occupants of the house were evacuated. One was transported to the hospital for smoke inhalation. The family declined to comment.

Riley is a 2021 summer reporting intern from Western Washington University. Her internship is based in Cheney and sponsored by the International Society of Weekly Newspaper Editors.