A lifetime of West Plains education 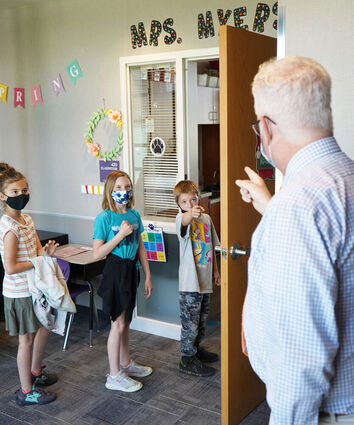 "We know all about you" Domonick Brown tells Windsor Elementary School Principal Vince Songaylo in the hallway outside Kristin Myers' second-grade class. Brown, Gianna Gibson and Holland Luedke (left to right) all had heard of the long-time Cheney School District educator's pending retirement.

"Mr. Area," Windsor's principal prior to Songaylo hiring there in 2010 said. A couple of minutes of discussion later, she expanded upon that.

"Mr. West Plains," Aucutt said. "He knows it like the back of his hand."

Songaylo is set to retire after a 35-year career spent entirely with Cheney School District. But it goes further back than that.

Songaylo was born in Cheney and, after his family moved to the Hayford Road area, has lived his entire life in the school district. He began his school district career as a kindergartener at Betz Elementary School.

One year at Betz led to three years - first through third-grade - at Four Lakes Elementary School. Back to Betz for fourth through sixth-grade then on to Fisher Junior High School - now The Lofts apartment building across from Eastern Washington University's Showalter Hall - followed by Cheney High School.

Receiving his diploma in 1979, Songaylo enrolled at EWU, earning a bachelor's of education degree. He substitute taught for several years, always keeping a goal in mind.

"I really wanted to be in the area," Songaylo said. "That was important to me."

"Those were great years full of laughter and learning for both of us as we were new teaches," Bates said. "Vince was the first one I turned to if I needed help or just my spirits boosted."

Songaylo taught at Garden Springs for 11 years. One of those second-grade students he taught early in his career was Tony Paradiso, whose two sons now attend Windsor.

"As a kid, I was a bit of a storyteller," Paradiso said. "Vince was always very patient with me, listening and redirecting as needed. He never belittled."

In 1987, Songaylo, and Bates, took teaching positions at Windsor. Songaylo said he was first a bit overwhelmed moving from the smaller to the larger school, which was K – 6 as opposed to Garden Springs' K – 2. But he felt his "great experience" at Garden Springs, which featured the family/community atmosphere of a smaller school, could work at Windsor and he began to create what over time became known as the "Wildcat Family."

Songaylo taught at Windsor for 11 years, during which he completed his masters of education degree. He moved up to assistant principal, working at both Windsor and Sunset Elementary School in Airway Heights.

When Aucutt retired in 2010 after a 40-year teaching career, Songaylo put his name in the hat - "and here I am."

"I was thrilled when he got the job," Aucutt said. "I could walk away with the feeling things were going to be in good hands. He lived and breathed that (Windsor principal) job."

The latter is a sentiment Superintendent Rob Roettger can attest to, noting Songaylo is known to work late into the night.

Songaylo loves the setting at Windsor, noting it has the elements of a rural, country school while being in a suburban setting and just a 10-minute drive to urban areas such as Cheney, Spokane and Airway Heights. The area, Windsor Crossing, has seen its share of population ups and downs over his career there - thriving as a housing for Fairchild Air Force Base personnel at first.

As Fairchild began getting out of the housing business in the 1990s and early 2000s, vacancies at Windsor Crossing increased, leading to enrollment decline at the elementary school across Hallett Road. But in the past 15-20 years, that region of the West Plains has exploded in residential development that not only filled the halls of Windsor with kids again but led to the construction of Snowdon Elementary School in 2012-2013.

Through this, students and their families along with the education staff worked tirelessly to build the "Windsor Family." Songaylo has played a large roll in this, bringing a sense of playfulness along with attention to details - such as learning all of the students names - while also handling and incorporating all of the changes in education taking place over the years.

Many in the district attest to Songaylo's contributions.

"I appreciated his 20-plus years as a classroom teacher prior to becoming a principal, because he has an excellent understanding of academic standards and working with students," Windsor speech therapist Lynn Reilly said. "While willing to explore new concepts and ideas, he kept the bar high for student achievement and accountability. The best gift anyone can leave when they retire is a positive impact on the lives of others and Vince has done that!"

Third-grade teacher Carol Dobbins describes Songaylo as someone with a "big heart" who "loves a good joke."

"He loved coming into my classroom, where he would tease and rile up the students, and then leave," Dobbins said.

Dobbins added Songaylo supported students, staff and the community to arrive "at the best outcomes for everyone" when it came to school decisions. She added he "always had time and a positive word for others."

Roettger said Songaylo's impact can be seen simply by taking a walk with him around the school, and watching the reaction of students to his presence.

"When I go out to the playground with him, I feel lonely because the kids all flock to Vince," he said.

Betz general music, band, strings and choir teacher Shaun Kelly credits Songaylo for helping him get his start as an educator. Kelly was finishing his enlistment in the National Guard and subbing in the district for several years when Songaylo hired him part-time as Windsor's music teacher. He recalls his wife's impressions upon first entering the building for an open house.

"She stopped in her tracks and looked around, smiling peacefully, closing her eyes for a minute or two," Kelly said. "When we left, she proclaimed that Windsor was the 'most comfortable, beautiful and inspirational school building' she'd ever been in, including her own. Vince mad this happen for her, for us, our staff - and thousands of students."

Songaylo is humble, embarrassed when it comes to such accolades, quickly turning those around to make sure people know it's his dedicated staff as well as the families in the Windsor community who have created such an environment.

It's an environment that's weathered changes in education Songaylo and others have experienced these past 35 years. When he started at Garden Springs, technology in the classroom consisted of a chalkboard, notebooks, purple-ink mimeograph machines and film projectors.

In fact, Songaylo said demonstrated proficiency in threading a film projector was required before graduating from EWU - there was even a class in it. Now, technology in the classroom is Smartboards, laptops, document cameras and Zoom meetings.

Songaylo said the advances in technology have made a "huge" difference in how teaching is done along with education as a whole. He offers a hesitant "yes" when asked about benefits from these changes, adding kids today are very "tech savvy" and have more technology thrown at them outside the classroom sometimes than in.

The changes make teaching today more sophisticated than when he first began, Songaylo said. Teachers today are "very skilled at what they do, and adaptable," something the Covid-19 pandemic revealed when schools physically closed in March 2020, and within two weeks, had pivoted to an all-online instructional format.

"Teaching is not as isolated a job so much as it was," Songaylo said. "The work part is easier in some ways due to greater capabilities for sharing details with other educators. The level of learning, even 10 years ago, is so much higher." 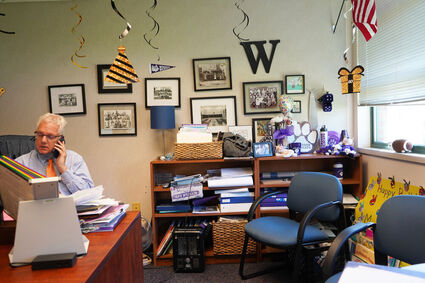 Vince Songaylo works in his office that's stuffed with educational resources, awards, mementos and other items.

Songaylo leaves that arena officially on June 30, "and we're making him work all the way to the end on that last day," Roettger says, laughing. But the soon-to-be former Windsor principal will still contribute to education, doing some consulting work with other area school districts.

He also has several trips planned, including one to Greece in September, along with Hawaii and hopefully Alaska next year. Songaylo said he also is looking forward to attending more vintage item shows where he can buy and sell collectibles, something of a hobby for him.

And, he will miss Windsor, the students but also the staff.

"I will also miss the adults here a lot, they're good people," he said. "The right answer, though, is the kids, and that is true."

"It's still about the kids," he said of teaching. "Kids still want an adult who cares, to do well and be proud of their work."