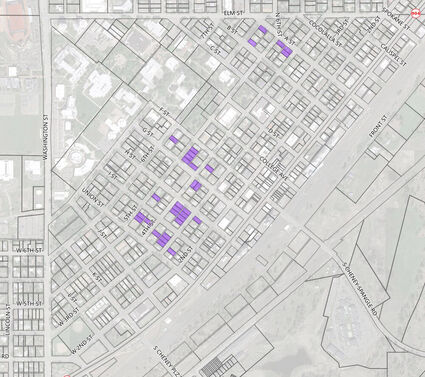 The map above shows the location of 31 parcels that are both R-3 and 5,000 square feet or less, and thus eligible for a density exemption.

At their March 8 meeting, commissioners received information on changes that would allow more units in R-3/multifamily zones as well as creation of a new chapter that would regulate cottage-style housing, also referred to as "tiny homes."

The amendment also adds an exemption for these density requirements to the three already listed. The new exemption would allow someone who places a one-bedroom/one bathroom or studio unit on a 5,000-square-foot lot to round up the allowed density from 2.4 units to three units, while still meeting all other applicable requirements.

"You cannot get three units based on 21 units per acre," senior planner Brett Lucas said.

Public Works Director Todd Ableman said most of the parcels where the R-3 amendments would occur are located in the center section of the city where single-family zoning eventually morphed into R-3 over time.

Lucas said he had identified three clusters of lots, 31 parcels, that are both R-3 and 5,000 square feet and under where the changes would apply, none west of Union Street. Some of those parcels likely have existing structures, and Lucas said he would get back to the commission on just how many those were.

The cottage-style housing zoning regulation were first discussed in 2019, but shelved when the coronavirus pandemic hit. Lucas said the main reason for the codes, and the department returning to discussing them, is movement in the state Legislature to increase the options for affordable housing in municipalities.

Commissioner Dan Turbeville said the style reminded him of bungalow-courts from 1920s Los Angeles, a housing type he said was successful because of their close proximity to mass transit, which in that case was a trolley system. Turbeville requested Lucas provide additional information on the number of parcels in the city that would fall under these regulations and that were near Spokane Transit Authority bus stops.

Commissioners had additional questions regarding this style of homes, including a section dealing with homes built under cooperatives or cooperative ownership arrangements. Lucas said planning staff would assemble more information, adding that the city has time right now to address the issue ahead of the Legislature's final decisions.

"We don't know where the state will come down," he added.