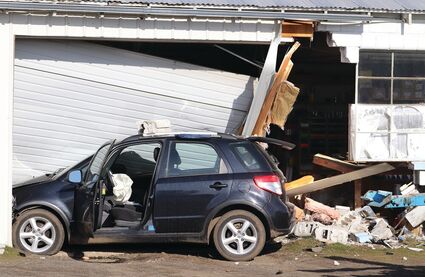 Jarms Pump Service building, 4 1st St., was damaged when a Suzuki crashed into a sidewall and garage bay door.

CHENEY - A local man was booked into the Spokane County Jail on Tuesday afternoon, March 2, following a crash that sent a car careening into a building.

Stephen Michael Foster, 37, was booked into the jail at 4:36 p.m. after being arrested on probable charges of driving while under the influence, third-degree driving while license suspended and operating a motor vehicle without ignition interlock.

According to a police report, witnesses said they saw a Dodge Durango eastbound on West 1st Street, approaching the merge lane near Cheney-Plaza road at a high rate of speed.

The driver of that ve...