By Drew Lawson
The Times 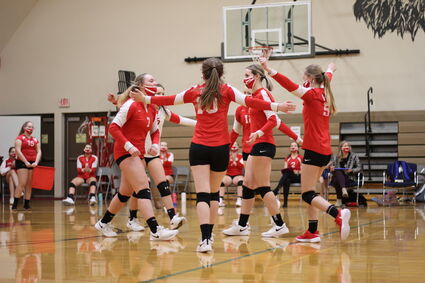 The Davenport volleyball team comes together after earning a point Tuesday night against Liberty (Spangle).

DAVENPORT - The Gorillas (0-2) battled for a set and a half, but are still searching for their first set and match victories this season after getting swept at the hands of the Liberty Lancers (2-0) at home Tuesday, Feb. 23.

The first set was back-and-forth. Davenport went on a 5-0 spurt to take a 23-20 lead, but Spangle-based Liberty erased the deficit and held on for the 27-25 decision.

Davenport built a larger lead and more momentum in the second set, taking a 17-12 lead. Liberty called a timeout and quickly went on a 6-0 run before blitzing...