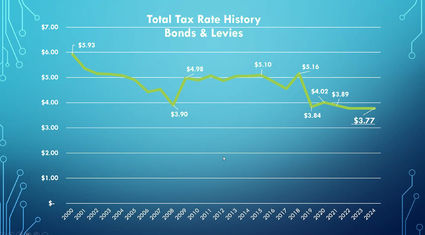 CHENEY — School district officials pushed back against claims at a Dec. 2 school board meeting that a proposed education programs and operations levy this February is really a disguised tax increase.

But the new total amount raised by the first year of the proposed EP&O levy would be $8.7 million — $1.7 million more than what is to be collected in 2021, the last year of the existing levy — and it represents what district resident Bill Johns said is a 24 % tax increase on property owners. Additionally, the subsequent over 6 % increase in amounts collected in 2023 and 2024 significantly exceed the rate of inflation, Johns added.

“In order for the district to a say that this huge increase is not really a huge increase, the new taxing authority proposal is to mix the existing three-year O&M levy and two-year specific capital projects levy into one continuous flowing levy,” Johns said in a statement at the meeting held remotely via ZOOM. “The proposed levy is too heavy a burden on already stressed taxpayers.”

Cheney Public Schools Superintendent Rob Roettger disputed this claim. Acknowledging the difficult circumstances taxpayers face because of economic impacts from the COVID-19 pandemic, Roettger said the district takes its taxing responsibilities seriously, as well as the responsibility of planning for the future.

“The proposed replacement levies shift some current funding categorically from capital projects to the EP&O district operations fund,” Roettger said. “The purpose in doing so is to provide financial flexibility as we prepare to meet budget uncertainties that lie ahead while also managing and maintaining a total tax amount that is virtually unchanged from 2021 to 2022.”

Together, the proposed measures represent a total levy taxing rate of $1.75, versus the 2021 rate of $1.87 per $1,000. The new rates factor in what district officials are calling a “conservative” property valuation increase in the district of 7 percent.

Johns contends the district is prolonging the capital facilities levy by rolling most of it into the EP&O levy. The two-year levy was passed in 2019 to raise just $4.27 million for specific technology needs, and Johns contends those needs have been met — and thereby the capital projects levy should disappear.

“This levy was not meant to be continual like a 21-year bond for new schools,” he said.

District Finance Director Jamie Weingart acknowledged that most of the technology needs had been met. A smaller scale capital facilities levy was needed, she added, to ensure the district has funds to replace aging technology in the future.

Weingart said while the district should be able to weather the financial pandemic crisis through use of its general fund balance to cover funding gaps, there are uncertainties looming. While enrollment has increased by 41 since bottoming out at 4,783.54 full-time equivalent students in October, it is still about 100 students below last year’s figures and far below the 5,053 used to calculate this year’s budget.

Enrollment and COVID-19 restrictions have impacted the district’s transportation allocation from the state, which is projected to be over $1.2 million less than budgeted. Weingart said it’s unclear how the Legislature will allocate future enrollment and transportation funding given these numbers when it convenes in January.

Topping things off, the district is forecasting a drastic reduction in levy equalization assistance (LEA) funding, which compensates districts who don’t have the high valuation abilities land-rich districts may have to meet their budgeting needs. West Plains growth is leading the Cheney School District to exceed the assessed valuation state average, resulting in a projected LEA support reduction from $659,365 in 2021 to just $13,469 by 2024.

“I think we get stuck in this mindset about right now,” he said. “The levies are about 2022, 2023 and 2024. It’s the future when we are back doing the things we are accustomed to, supporting our students, communities and families.”

“I think it is important to remember that yes, we’re dealing with what we have to right now,” school board Director Marcie Estrellado added. “But we wouldn’t be doing our jobs if we just kind of waited for this to pass, and just kind of woke up at the end of it and said, ‘OK, now what?’ It’s really important to be the ones who can look past this and prepare.”