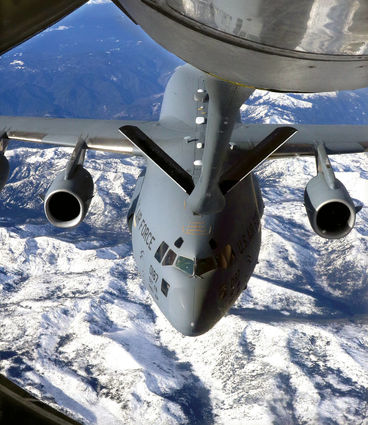 A U.S. Air Force C-17 cargo plane lines up behind a Fairchild Air Force Base Stratotanker above the Rocky Mountains on Tuesday morning during an aerial refueling training flight.

FAIRCHILD AFB-Nov. 17 was the 92nd Air Bombardment Wing's 73rd birthday at Fairchild Air Force Base. To celebrate, the base hosted members of the media, including reporter Drew Lawson and publisher Roger Harnack of the Cheney Free Press, on a refueling flight on a KC-135 Stratotanker.

The 92nd Air Bombardment Wing became the 92nd Air Refueling Wing in 1994 after several name changes to reflect the base's changing missions and remains so in present day.

The experience began as the sunrise, visible from base toward Cheney, crested over the rolling hills of the West Plains and painted orange...