Retired school administrator Patrick Whipple fulfilled an item on his "bucket list" when he published a book on local history earlier this summer. 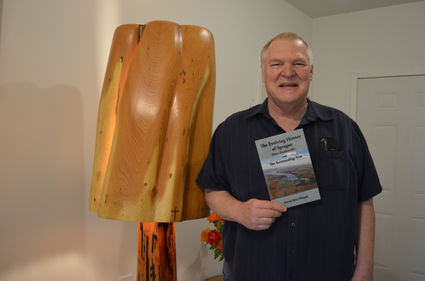 fulfilled an item on his "bucket list" when he published a book on local history earlier this summer.

A 1973 Sprague High School alum who retired in 2017 as the superintendent of the Sprague School District, Whipple said it was on his "to do" list to write a book about some of the stories his grandfather and father told him.

Whipple said since he only remembered about a dozen of the stories, he realized it wouldn't be enough for a book.

"I always had an interest in the Channeled Scablands, and what brought people to Sprague, Ritzville, Harrington and this surrounding area," Whipple said, "so I made a two-part book."

The first half briefly covers geological formation of Eastern Washington, and early man on the North American continent. Stories of fur traders, Native Americans and early missionaries including familiar names like Colonel Steptoe and Colonel Wright, formation of the Colville Trail and Mullan Road, and early Sprague pioneers are also explored. Whipple takes a brief look at the influence of the Northern Pacific Railroad in the area and the changing of the town's name from Hoodooville to Sprague in honor of John W. Sprague, a Civil War Hero.

Then Whipple looks at the history of Sprague's three cemeteries, with headstones dating as far back as 1882.

"These are all very short stories that are tied in to something in Sprague. I wanted it unique to the area here," Whipple said. "I tried to put in stuff that's not really mentioned in other books, but it evolves around people in Sprague and the surrounding areas."

The second half of the book is built from the oral histories Whipple gleaned from his grandfather, Dan Whipple, who worked as the Sprague depot agent for Northern Pacific Railroad; and his father, Dick Whipple, who managed Old National Bank. 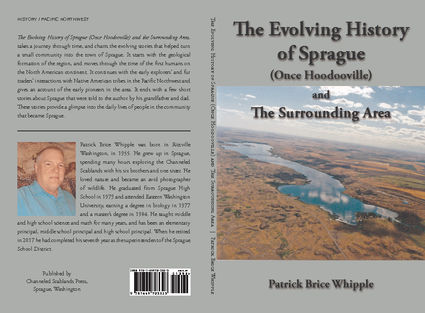 Front and back cover of local author's, "The Evolving History of Sprague (Once Hoodooville) and The Surrounding Area." The book is published by Channeled Scablands Press, Sprague, ISBN 978-1-64970-332-3.

"My dad worked in a bank, and he had a lot of Old Timers who would come in and want to talk. He said 'I can't get any work done because they all come in and want to visit,' but he always took time to do it," Whipple said. "What I tried to put down is really true history, as seen through the eyes of the pioneers - how they saw it, and what they told."

Throughout the book are colorful photos taken by the author, as well as historical black and whites.

"My goal was to have a clean, short-story history book that's attractive. I tried to keep it simple and short," Whipple said of the 100-page book. "I had a lot of fun doing it. And I learned a lot of stuff I thought I knew that I didn't. It was kind of surprising what I learned, because that's not the way I thought it was."

Whipple said he hoped when people finished reading his book, they would have an interest in some area they would pursue further - "to perpetuate the art of history."

Whipple said he might just write a historical novel next.

Katie Teachout is the editor of the Ritzville-Adams County Journal. The Journal is part of Free Publishing's six newspaper lineup.

Katie Teachout is the former editor of The Ritzville Adams County Journal. Previously, she worked as a reporter at The Omak-Okanogan County Chronicle, the Oroville Gazette-Tribune, Northern Kittitas County Tribune and the Methow Valley News. She is a graduate of Western Washington University.

How to purchase a copy of the book

To purchase a copy of "The Evolving History of Sprague," visit Whipple's webpage, evolvinghistoryofsprague.weebly.com. There is an order form on the webpage. If you have trouble accessing the webpage, call Whipple at 509-257-2810.