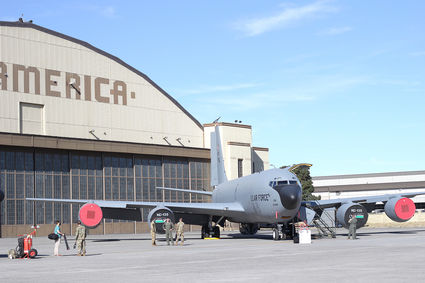 A KC-135 sits in front of a Fairchild Air Force Base hangar as military personnel celebrate the birthday of the stratotanker.

FAIRCHILD AIR FORCE BASE-On Aug. 31, 1956, the KC-135 stratotanker took its first flight off base. 64 years later, the refueling tanker continues to be the model used by the base for refueling missions and deployments. The base celebrated the "birthday" of the KC-135's first Fairchild flight Monday.

That KC-135 flight occurred two years after the Air Force purchased the first 29 of an eventual 732 plane fleet. The prototype was the Dash 80, designed in 1954 at the beginning of the Cold War, the same year the Air Force made the purchase, according to a presentation given to media by Chief o...