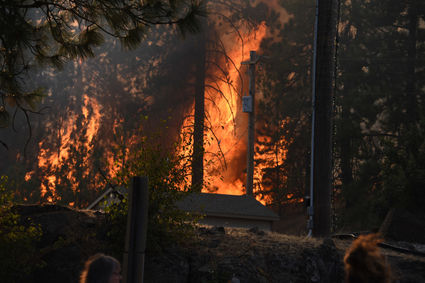 Flames from the Badger Lake Fire burn perilously close to a home on Sunday evening, Aug. 16.

CHENEY -- Despite smoke and flames several hundred feet away, some area water enthusiasts have reportedly been trying to launch their boats from the docks at Badger Lake.

Accordingly, the state Department of Fish and Wildlife has issued a notice reminding people that the public access site at Badger Lake is "closed indefinitely due to a wildfire burning out of control in the area." DFW officials stated that despite evacuations of residents in the area, first responders are having to deal with people trying to get to the lake to launch boats.

"Officials ask you to stay away from the area and off the lake for the sake of safety and to give crews space to fight the fire," the department stated in the Aug. 18 news release.

Four separate wildfires burst out late Sunday afternoon, Aug. 16, and fire crews from numerous local and state agencies have been battling the blazes ever since. One fire at Rock Lake has been contained and another joined with the remaining two, according to the Department of Natural Resources.

The remaining Badger Lake fire is calculated at 244 acres, burning east and northeast of the lake, and the Williams Lake fire is at 22 acres. Both fires are listed at 40 percent contained as of Tuesday night, although crews have been successful in getting lines around both.

A helicopter and Fire Boss aerial tanker worked in conjunction with ground crews to contain a flare up on the east side of the Badger Lake fire on Monday. Crews were working the edge of the fire today to locate hot spots and extinguish them. They were also clearing out several large slash piles left by recent logging activity that caught fire Sunday.

Williams Lake Road remains closed. DFW noted that the gate to the water access site on the south end of the lake where the fire is burning is closed until further notice. Signs notifying people of the closure are posted on Rock Lake and Williams Lake roads.

Five hand crews of 20 firefighters each, 30 engines, two dozers one excavator and 250 fire personnel are currently onsite at both fires.