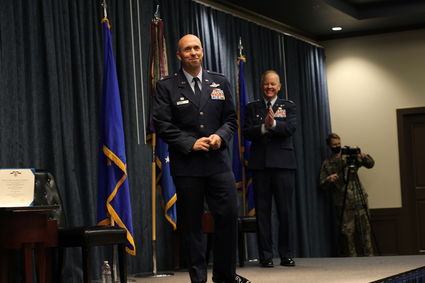 He takes over for outgoing commander Col. Derek Salmi, who will be "assigned to the joint staff at the Pentagon in Washington D.C.," according to a press release from the 92nd. Salmi was commander of the 92nd for the allotted two years.

Bentley takes over at Fairchild after a stint in Royal Air Force Mildenhall, England. According to the press release, he "supported four Air Force Major Command flying programs and over 16,800 military, civilians, dependents and retiree personnel as the vice commander."

He spoke to a physically-distanced crowd Wednesday upon assuming command. The crowd included active-duty Air Force members, immediate family of Bentley and Salmi and public figures such as Spokane Mayor Nadine Woodward.

"I promise my family and I will work very hard and continue to put our best foot forward to continue the tradition and mantra here of 'higher, stronger and faster,'" Bentley told the crowd.

Salmi also addressed the crowd as command shifted from him to Bentley, remarking how he and his family would miss the West Plains area.

"Events like today serve as a great reminder of certain ideas that by now I should know better of," Salmi said. "One of those is the sense of time, or more specifically the acute speed at which time seems to move. No matter how I tried to warn myself, or coach myself through the fact that time always seems to move so much faster than I expect, I find myself once again surprised and once again wondering where the days, weeks and months have gone."