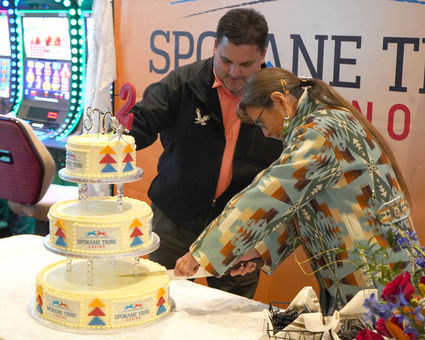 AIRWAY HEIGHTS – For many standing in the audience gathered around a three-tiered cake at the Spokane Tribe Casino, this day didn't seem possible several short years ago.

The casino kicked off a month-long celebration of its two-year anniversary with a ceremony today (Jan. 8) honoring tribal and community members who worked to get the first phase of the Tribe's economic development project off the ground. The first phase of that, the $40 million casino, opened on Jan. 8, 2018 after 10 years of planning, state and federal approval processes and legal challenges.

Tribal leaders also announced plans for future expansion – not only in the casino west of Airway Heights but also for a hotel scheduled to break ground this summer in Chewelah. Spokane Tribe Council Secretary Tiger Peone said the expansion at Airway Heights will essentially double the current 38,000 square foot casino, adding a food court, sports bar, non-smoking area and an entertainment venue that will seat upwards of 1,000 people.

Spokane Tribe Chairwoman Carol Evans told those gathered that requests for proposal for construction of the hotel in Chewelah have been issued. A scheduled groundbreaking for the facility is tentatively set for early summer and is running a bit behind due to weather.

"It fits the size of the market feasibility for that area," Evans said of the proposed 70-room hotel.

Once underway, however, the casino expansion should take about 14 months with the hotel going up in 8-10 months.

"When we build, we build fast," Evans said.

The Airway Heights casino has 260 employees, general manager Javier De La Rosa said in opening remarks. He attributed the success the casino has had in two years, and the ability to move forward, to the work of those employees.

"It is a matter of pride to see our casino growing and all that it has accomplished in its first years of operation," he said. "We have many plans ahead of us."