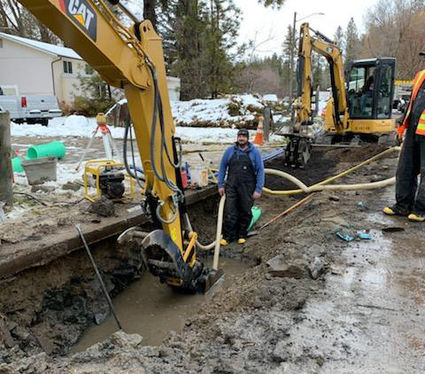 Crews work on repairing a water main break in Medical Lake that has left 50-60 customers without water service on Thursday, Dec. 19.

MEDICAL LAKE - Water continues to be interrupted for some city residents after contractors punctured a 6-inch watermain early today.

The break, on South Pineview Drive between East Stanley and East Evergreen drives, initially affected water pressure across the entire city in varying degrees before city crews were able to isolate the break and limit impacts to the South Lake Terrace area, according to city officials.

As of about 2 p.m. between 50 and 60 homes remained impacted by the issue, according to City Administrator Doug Ross.

Contractor and city crews were still working to fix the break at mid-afternoon and were expected to remain on the job until repairs were complete.

"It will be back online by the end of the day," Ross said. "That's the best estimate I can give you."

The waterline wasn't where it was supposed to be.

"We thought it was on the other side of the street," Ross said.

Contractors for N&N Construction are working to install catch basins in the neighborhood as part of a Transportation Improvement Board grant awarded to the city this year.