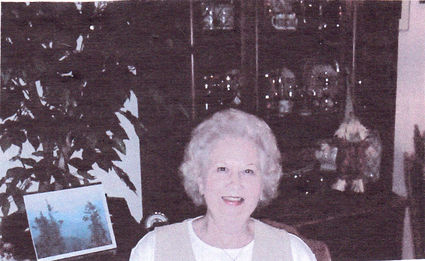 Shirley was taken home to be with the Lord on November 3, 2019 after a long battle with Alzheimer’s.

Shirley was born April 25, 1925 and raised in St. Louis, Missouri, the youngest of four children and the only girl in the family.

When her children were young, Shirley enjoyed being a stay at home mom; volunteering with the PTA, American Heart Association and Cancer Society. Later, she would be employed as a secretary, working with engineers at McDonnell-Douglas on early development of rockets in the U.S. space program. She retired from Emerson Electric, working in their division that provided armament for the u5 military.

At 75 years of age, Shirley and husband, John, moved to Cheney to be close to her daughter and family. She returned to St. Louis often on vacation to visit her two sons and their families.

Shirley and John loved the Cheney community. They were active members of the Cheney Church of the Nazarene for many years.

She also enjoyed many years of watching grandchildren and great-children compete in school sports. Shirley was a life-long St. Louis Cardinals fan. That love never diminished though many miles separated her from her beloved team.

The Wilsons enjoyed many years in the Cheney community before deteriorating health forced a move to Brookdale Park Place. Shirley ls preceded in death by her husband, John, parents and brothers.

A private service for family will be followed by internment at the Veterans Cemetery in Medical Lake, Wash. In lieu of flowers, donations are requested to the Alzheimer’s Association.