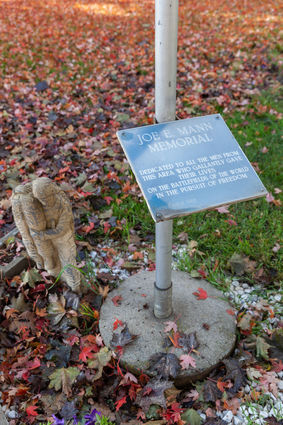 The existing Joe Mann memorial and plaque honoring Reardan's veterans. The faded plaque is to be replaced by a walk-around memorial amphitheater near Audubon Lake in Reardan. Mann is celebrated annually in the Netherlands, and his heroism taught to school children there.

REARDAN - Posthumous Medal of Honor recipient Private Joe Mann's exploits in Holland during World War II have been celebrated across the globe.

He is, in part, the namesake of the Department of Veterans Affairs Mann-Grandstaff Medical Center in Spokane. The former Army Reserve Center in Spokane was named Mann Hall. There is the Mann Theater at Fort Campbell, Ky., home of the 101st Airborne. A U.S. Navy ship bore his name, as does a street at Joint Base Lewis-McCord.

And Mann's selfless heroism on the battlefield are to this day still taught to school children in the Netherlands, where the...