Who is this male?

Spokane County Sheriff's Office Major Crimes Detectives are attempting to identify the male in these photos and would like your help. 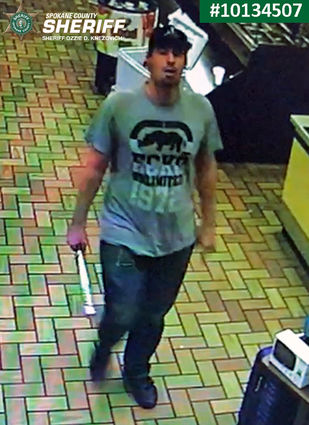 Investigators are looking into a reported assault inside the Petro station, located at 10506 W. Aero Road near the Medical Lake/Interstate 90 interchange at approximately 4 a.m. on Sept. 20, 2019. They are also looking into the possibility of a reported stolen truck from the same location, during the same time frame, is connected.

The initial information from witnesses regarding the assault indicates a silver Toyota Rav4 arrived at the business occupied possibly by two males and two females. All four enter the store and a few minutes later, the male in the photos, grabs a small metal bat (tire thumper) and appears to assault one of the females.

One of the males and the two females leave the store together, leaving the suspect behind. None of the three, including the one female who appears to have been assaulted, was identified or reported the incident.

During the same time frame, a dark red, 1993 Ford F150 pickup, with Washington license plates C39998S was stolen from the same location. At this time, it is not known if the male suspect stole the vehicle or if the theft is connected to the assault in any way.

Investigators are hoping the potential female victim or the male and female who accompanied her to the business will contact them regarding this incident.

If you recognize the male in these photos and can identify him or have information regarding this investigation, please contact Detective Nate Bohanek at 509-477-3223, reference #10134507.