When cleaning up becomes a calling 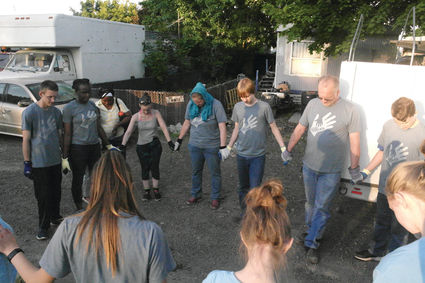 The phrase “The God Squad” brings to mind visions of early crusaders or the television show from the early 2000s, not a crew of teenagers in matching pastel shirts and too-big gardening gloves. But that’s exactly what it is: a youth group community service project turned autonomous organization that helps Airway Heights residents in need with landscaping, trash removal and city code violations.

At the heart of the squad is local artist and former pastor Chris Bovey, who started the group with teen volunteers from Airway Heights Baptist Church. Now, the squad consists completely of 10-20 volunteers and is non-denominational.

The majority of the squad’s work happens in the summer, when Bovey works with Airway Heights code enforcement officer Kristina Blake to identify deserving property owners at risk of eviction and in need of help.

“We try to focus on people who can’t clean up on their own first,” Bovey said. “I think there’s a need —it looks like a third-world country sometimes, and its right in our backyard.”

Last week, the squad visited April Guypr, a mother of five who lives in a mobile home park on the south side of Airway Heights. Guypr, a housekeeper and organizer, has fibromyalgia and narcolepsy and takes care of her disabled son full-time, making managing her property a challenge.

That’s largely due to the conditions of the mobile homes on the two plots Guypr rents. Before moving to the park, she and her children were homeless. When they were able to rent a space in the park, they found that the trailer that came with it had been destroyed by the previous tenant upon his eviction. New hardwood floors were completely torn up and the wiring was nonexistent.

“When I cleaned it out I found needles, syringes, spoons above the windows,” Guypr said. “I didn’t want the kids in there at all until I got it cleaned up.”

A friend living in the park let the family stay with them while they worked to fix the run-down trailer, eventually giving them his trailer when he left to care for an elderly relative. That left Guypr with two trailers — technically enough space to house her family, but with less than desirable conditions.

The Guypr family lives in a two-bedroom unit with electricity but no running water, save for a jury-rigged toilet and washing machine. They visit a friend to shower and wash dishes. And their situation is not unique.

“It’s hard to keep hope,” she said. “It just goes away after a while.”

Tenants in most mobile home parks rent the lot “as is,” meaning they inherit any debris or junk left on the property by the previous tenants. That’s sometimes added to when they bring their own furniture and other items onto the property. And with dump fees creeping ever-higher, many tenants can’t afford to have trash removed even if they have a way to move it.

The God Squad brings all its own equipment to help with clean up, including gloves, shovels, and a massive trailer emblazoned with their logo. This year, the God Squad has partnered with the city and gotten dump passes. In years past, dump fees were paid for out of pocket by squad volunteers.

God Squad volunteer Scott Perkins said the group will only get busier as the summer progresses.

“A lot of our people are elderly or living from day to day,” Perkins said. “We can do things for them that they can’t do for themselves at this time; all we ask is that as you get better, pay it forward.”

The God Squad’s work often keeps park tenants from being evicted, and Bovey said he hoped it shows young people “that they don’t have to go to Mexico to do a mission project.”

Guypr, who got a month behind in rent when her boyfriend and primary income-provider injured his back earlier this year, said she is “constantly” worried about eviction.

But after just two hours, the God Squad had cleaned up a huge portion of her property, leaving Guypr on the verge of tears.

“I’m really thankful for them,” she said. “I’ll probably cry when I go inside. It would have taken me so long to clean this up by myself.”