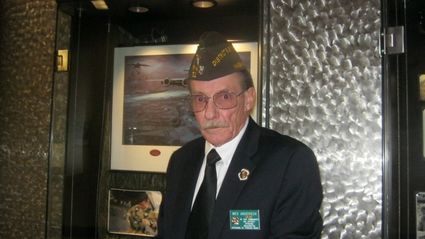 After 27 years, Wes Anderson came to accept who and what he was. So it was that, in 1995, after years of personal struggles he “came out” — as a Vietnam veteran.

Two years later he made pilgrimage to the Vietnam Veterans Memorial in Washington D.C.

It took three days of sightseeing around the Capital before Anderson finally made his way toward The Wall, a monument featuring a 246-foot-9-inch long, black opaque wall built of 144 highly polished granite panels sunk unobtrusively into the ground.

Anderson rode the metro from his hotel, arriving at the west end of the sprawling Capital Mall in the early morning. He visited a bronze statue called “The Three Servicemen,” each representing a different ethnic group — European American, African American and Hispanic American who served in Vietnam — before sitting on a bench for several hours feeding a squirrel peanuts. Then he ventured to the wall itself.

On the Wall’s panels are inscribed 58,339 names, each belonging to a serviceman — eight are female nurses — who deployed to war-torn Vietnam between roughly 1959-1975 and never came home alive.

The names are not listed alphabetically, but by the day the person was killed, so it’s theoretically possible to see men killed in the same firefight listed together.

Anderson went to a particular panel.

“That’s where my friends are,” he said.

Anderson served as a Navy Corpsman with a Marine Corps infantry unit in Vietnam. Corpsman are affectionately and collectively known as “Doc” by the Marines they serve with.

Doc Anderson arrived in the hot, sticky, foreign-smelling air of Vietnam in November 1966 with basic Hospital Corpsman schooling under his belt, plus five-weeks of additional training at Marine Corp Base Camp Pendleton, Calif. It wasn’t nearly enough, he said.

Two days after arriving he was in the field, with a “rudimentary med bag,“ figuring things out as he went.

“After that I don’t want to get into it,” Anderson said. “It took me so long to get over it.”

Because there was a shortage of corpsman, his initial 12-month tour was extended. He spent a total of 19 months patching up wounded Marines, watching over his charges, and keeping otherwise insignificant wounds from festering in the humid climate.

Before he finally flew home in June 1968, he survived one of the bloodiest of Vietnam War engagements: The Battle for Hué, one of the many battles that were part of the overall North Vietnamese Tet Offensive. Once the dust of the destroyed city had settled a little over a month after it started, 668 U.S. Marines, U.S. Army soldiers, and Army of the Republic of Vietnam troops were killed and another 3,707 wounded in the fierce, house-to-house urban combat.

Now retired, Anderson is today on his second tour as state chaplain for the Veterans of Foreign Wars, a group started in 1899 following the Spanish American War that advocates for veterans. He is involved in a variety of groups, including a veteran’s task force being launched by Congresswoman Cathy McMorris Rodgers.

But Doc Anderson’s path to where is he is today wasn’t easy, and he spent many troubled years trying to put Vietnam behind him.

Like many others, his arrival back home was less than heroic. No tickertape parades for combat-shocked Vietnam vets, but instead vilification. Even though he and his returning comrades were advised to wear civilian clothes, it didn’t help. Protesters, Anderson recalled, were watching for them to arrive.

“I literally had to fight my way through SeaTac to get to my (connecting) plane,” he said, noting that he broke two fingers punching one protester in the jaw who apparently got in his way and pushed the wrong button.

“I was mad when I faced those protesters,” he said.

The son of a family with a long history of military service, including a sister who served in Iraq and Afghanistan as a nursing officer, Anderson said he didn’t understand protesters lack of gratitude for what he and other combat veterans had experienced.

“I couldn’t understand why they were ungrateful,” he said. “We were doing our job, our duty. What did we do wrong?”

After his discharge he packed both his uniforms and his feelings away in a box that has long since gone AWOL.

Instead of capitalizing on his combat medic experience and going into the medical field, Anderson earned a degree in business administration, and spent the rest of his working life in the lending industry.

Asked why he didn’t pursue medicine after Vietnam, he said, “I’d had to make decisions about who I could and couldn’t save. I didn’t want to make that decision anymore.”

Anxieties after highly stressful events have always been part of the human condition. It wasn’t until the mid- to late-19th century after the American Civil War that more modern attempts at treatment began.

Called, among other things, soldier’s heart, gross stress reaction, and shell shock, what is now an accepted psychological condition called post-traumatic stress disorder, or PTSD, didn’t exist as a diagnosis for men returning from Vietnam, according to the Department of Veteran Affairs.

“We were told to suck it up,” Anderson recalled. “There’s nothing wrong with you.”

After years of personal struggles he wouldn’t discuss on the record, Anderson finally sought out therapy on his own, which he paid for out of pocket.

Anderson said he didn’t say goodbye to anyone when he was informed that his Vietnam tour was over and he would be flying back to the U.S. He checked in his weapon and other gear, grabbed a bag of personal belongings the size of a briefcase, and spent the night near the flight line waiting for his helicopter flight the next morning.

“I didn’t say goodbye to anyone,” he said. “When I left Vietnam, I never really knew what happened to those guys. I left them behind.”

It took 27 years for him to finally say goodbye on that day at the Vietnam Veterans Memorial Wall.

He said he felt a sense of relief afterward.

“I made my peace with them,” he said.

Anderson refused to speculate about how many lives he may have helped save in combat. Asked why, he replied, “I don’t want to know. I would like to think that they all made it home safe.”

Today, Anderson talks with a lot of veterans of America’s modern wars. Even though he’s a Vietnam combat veteran, he noted that most won’t discuss their experiences, even among themselves.

Those who can’t hold it in any longer he refers to the Spokane Veterans Outreach Center for counseling, or the VA if they are in the system.

A friend of Anderson’s, and fellow corpsman, Petty Officer Third Class Mike Judd, was serving with a Marine reconnaissance platoon when he was killed in combat when the CH46 helicopter he was riding in took on enemy fire and crashed in 1967. He was eventually listed as killed in action, body not recovered. His remains were later found in 2013 and buried at Arlington National Cemetery with full military honors, according pownetwork.org. 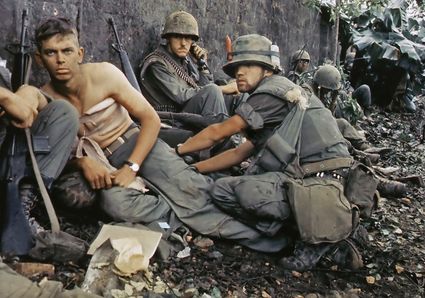 As remains of missing servicemen are found and repatriated to their families, their names are added to The Wall. Dedicated in 1982, the original wall listed 57,939 names. Over 400 names have since been added.

Of the roughly 10,000 Navy corpsman who served with Marine Corps units, 645 were killed and more than 3,300 wounded, according to the U.S. Navy Bureau of Medicine and Surgery.

The Moving Wall, a half-scale replica of the Vietnam Veterans Memorial in Washington D.C. will be in Medical Lake from Thursday-Sunday, June 13-16, and will be available for viewing at 250 S. Prentis St., on the Medical Lake Middle School playfield. Each day will include an opening and closing ceremony.

For more information about The Traveling Wall’s visit to Medical Lake go to http://medicallake.org/vmwall/.