Memorial Day weekend event could draw up to 3,000 spectators, 400 reenactors 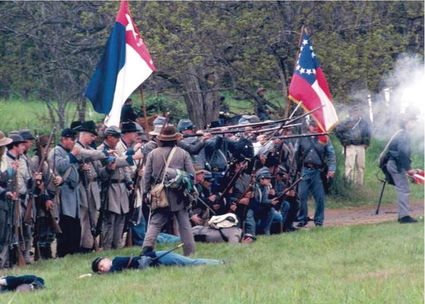 Washington State Civil War Association reenactors take part in a simulated battle in 2003 at Fort Steilacoom in Western Washington. The area is similar to the location the association and Cheney have selected near the city's wastewater treatment plant for an inaugural event over two and a half days this Memorial Day weekend.

The Civil War is coming to Cheney.

Or rather an historically-close reenactment of the conflict that engulfed the nation for four years during the 1860s and is the deadliest war ever fought by U.S. forces that changed the country in ways still felt today.

Whether it's called the Battle of Cheney or the Battle of Minnie Creek, Cheney officials have struck an agreement with the Washington Civil War Association to host the annual Civil War reenactment over two and a half days this Memorial Day weekend. The event, which has drawn 200 - 400 reenactors and 1,000 - 3,000 spectators, will take place...